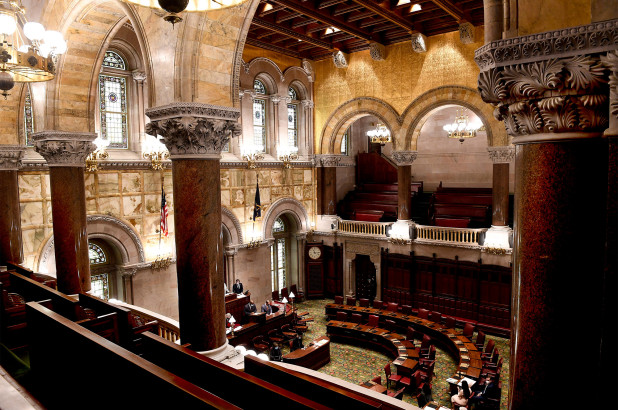 COMING SOON: To a Local Tax Collector in your State As Well

By Carl Campanile and Kate Sheehy

The Senate Chamber at the New York State Capitol in Albany.Hans Pennink

New York wants to sock it to Wall Street and the wealthy.

Both houses of the state legislature have proposed budgets that include nearly $7 billion in new and increased taxes on businesses and the rich.

The tax raises come despite a $100 billion avalanche of fresh federal aid to New York, including $12.6 billion directly to state government coffers.

Assembly leaders crowed in a press release Sunday that state lawmakers are proposing a $208.3 billion budget for the next fiscal year.

Their plan includes a 22.6 percent increase in spending — or $16.9 billion — over last year. That’s more than 10.5 percent higher than what Gov. Andrew Cuomo is proposing.

To help cover the new proposed expenses such as rent for “New Yorkers who do not have access to unemployment, federal stimulus funds and other assistance programs’’ — including illegal immigrants — the pols said they want to raise the nearly $7 billion in new revenue through the taxes.

The proposed new levies include:

When Congress passed the $1.9 trillion COVID-19 relief package earlier this month, the office of US Senate Majority Leader Chuck Schumer (D-NY) crowed that New York’s budget deficit would effectively be wiped out, potentially killing the need for new tax hikes, given all the dough it would receive.

That’s why some economists and business leaders told The Post on Sunday that they are scratching their heads over the state legislature’s proposed budget plans, which are essentially the same in the Assembly and Senate.

“These proposals would raise New York’s top state income tax rate to its highest statutory levels since 1979, when it was 12 percent,’’ said  EJ McMahon, fiscal analyst at the watchdog Empire Center for Public Policy.

“The combined state and city rate for city residents would top out at 15.75 percent, the highest in any state.

“Even if the final budget deal doesn’t include this whopper of a soak-the-rich hike, many in the targeted class could see it as a harbinger of things to come’’ — and flee, taking their money with them, he said.

Kathryn Wylde, CEO of the pro-business nonprofit Partnership for New York City, lamented, “The revenue package put forward by the legislature appears to be the most aggressive we have ever seen.

“The top personal-income-tax rate may have been slightly higher during the ’70s, but taxpayers back then could deduct their state and local taxes from federal tax liability, so the effective tax burden was lower.

“It is also relevant that during the 1970s, New York lost about 1 million residents and half its Fortune 500 companies. So it should come as no surprise that we are likely to see another exodus in the next few years,’’ she said.

“If these revenue raisers are approved in the final budget, it will be very difficult to attract or retain the talent and private investment that we need for a healthy recovery.”

But liberals in the state were thrilled by the proposed taxation and spending.

“We are heartened that the State legislature is beginning to take steps towards progressive, sustainable revenue streams — a sign of the tireless organizing and advocacy from thousands of grassroots New Yorkers,’’ said the Democratic Socialists of America, the party behind Bronx Congresswoman Alexandria Ocasio-Cortez, in a statement.

The Working Families Party added in its own statement, “The proposed budgets use a three-pronged approach of simultaneously raising income, corporate, and wealth taxes on the richest New Yorkers.

“Thank you for following the leadership of grassroots organizations across the state.”

A spokesman for Cuomo’s state Division of Budget told The Post in an e-mail, “We are reviewing the Legislature’s proposals.

“That said, the Governor has made clear that the state — facing $17.5 billion in revenue loss over just two years — needed $15 billion in funding from Washington. We are evaluating the Federal legislation and seeking further federal guidance to better understand how this funding can be used.

“The federal funding is a one-shot resource and is not recurring, and we will work with the Legislature to identify the best solutions to close the current and out-year budget gaps as we negotiate the budget ahead of the April 1 deadline.”