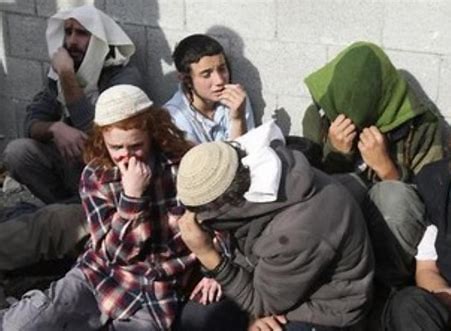 Teens were driving through Samarian village of Jamma’in when Arabs identified them as Jews & gave chase. On Wednesday night, three teenage boys traveling from the Barkan neighborhood to the Gav Hahar settlements via the old road through Jamma’in were attacked by an Arab mob.

There exists a longer route connecting Barkan with the various settlements of the Gav Hahar region (Yitzhar, Itamar, Elon Moreh, Har Bracha, and others), but the teens chose to travel on the more direct route that took them through the village of Jamma’in. It was while they were driving through the village that they were identified as Jews, and a large number of Arabs, both in vehicles and on foot, began to pursue them.

They caught up with them at the point where the road joins the main highway at Huwara, when a vehicle being driven by an Arab rammed into the youths’ vehicle and the mob started to attack them.

Two of the youths managed to escape, but the third was wounded.

IDF forces, police, and a large medical contingent arrived at the scene to assist the wounded youth, who was evacuated to Beilinson hospital in Petah Tikva.

Meanwhile, security forces searched for the other two youths for hours, fearing that they had been abducted. They were only found in the early hours of the morning, when the two arrived, exhausted, having been hiding on the slopes outside the settlement of Yitzhar all night and fearing that the Arab mob would find them there.

“This morning, the three boys were in shock at hearing that the mob that attacked them and tried to murder them was now accusing them of being part of a price-tag operation,” said the father of one of the youths, who was among those searching for his son all night.

“The boys were traveling to Barkan and turned left onto the Jamma’in road, which a lot of people use as a shortcut to Gav Hahar. Most likely due to the Arab festival that was being celebrated, the streets were full of people even at that late hour, and they realized they were Jews. They only escaped being lynched by a miracle and thank G-d they managed to flee. We are helping them and supporting them and we hope they’ll be fine.”

Meanwhile, attorneys from the Honenu organization are assisting the youths and will be demanding that the attackers pay the price of their deeds.

Iran Denies Involvement in Attack on Israeli-Managed Tanker off Oman

Fourth Day in a Row: Number of New Coronavirus Cases Above 1,300