The Message that was Missed: Chris Cuomo, Said the ‘Quiet Part Out Loud’ 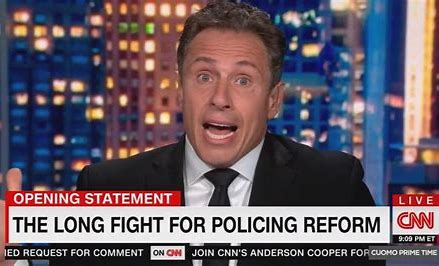 In a Rant Last Week, Cuomo Says that He is Black on the Inside. This is the Seriously Demented Soul of the Left.

The host of “Cuomo Prime Time,” who just last month claimed on-air to be “black on the inside,” claims to have the answer on gun and police reform.

Cuomo at one point in the monologue attempted to affect the hypothetical accent of a confused white parent, asking:

“What’s going on with these police? Maybe we shouldn’t even have police,” he said, before directly addressing the whiteness of his audience:

In a shocking collection of interviews from the George Floyd memorial in Minneapolis, far-left extremists admitted to wanting another civil war and implied that white people need to be killed.

The extremists were all in agreement that if he was not convicted they would support “street justice” for him, meaning murder.

One of the women said that she believed that “thousands” of unarmed black men were killed last year in the United States.

They all also seemed to agree that there is a “genocide” happening to African Americans — and “anyone who isn’t white.”

When asked about a second Civil War, one young woman said “if that’s what it takes, then we have to do it.”

Asked if it will happen, yet another woman said “probably.”

“I don’t want to say we need to start killing all white folks, but it’s like…” one of the militant extremists said.

“Maybe they need to feel the pain and the hurt,” she continued.

Maybe Chris Cuomo Should Be Charged with Seditious Behavior? Everything He Said was Quoted by the People Interviewed

One thought on “The Message that was Missed: Chris Cuomo, Said the ‘Quiet Part Out Loud’”