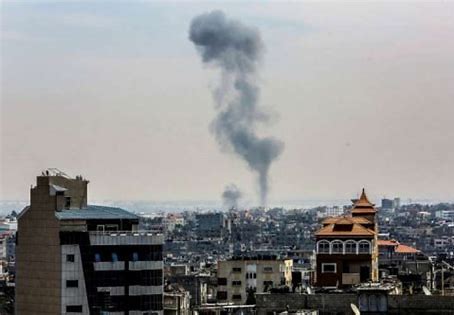 Alarms sound in Ashdod, Ashkelon, Netivot and localities in the Eshkol and Sdot Negev councils, rocket explodes near Netivot market. Alarms began to sound after 12:00 pm in Ashdod, Ashkelon, Netivot and localities in the Eshkol and Sdot Negev regional councils. No injuries or damage were reported. A rocket hit near a supermarket in Netivot and there were no casualties.

During the night, more than 40 rockets were fired at Gush Dan, the Shfela and the south, and Iron Dome intercepted some of them. Rocket shrapnel fell during the night in Tel Aviv, Bat Yam, Rishon Lezion and Ashdod.

The IDF released a video of remote-controlled aircraft operators deciding to give up an attack at the last minute after identifying children in the target area.

An IDF spokesman said this morning that IAF fighter jets had attacked military assets at the intelligence headquarters of Hamas’ military wing in the northern Gaza Strip.

The building houses Hamas intelligence operatives who formulate analyses for the organization. “This attack constitutes damage to key infrastructure in Hamas,” the IDF spokesman said.

IDF Spokesman Brigadier General Hidai Zilberman said that in addition to the two Sinwar houses in Khan Yunis, a battalion commander’s house in the Zeitun neighborhood and the house of another senior official were attacked last night.

Zilberman noted that the IDF last night entered “phase 2” in its operation to attack the “Hamas metro” in the central and northern Gaza Strip with about 100 bombs from dozens of fighter jets.