After 2000 Years Of European Persecution Against the Jews, Europe, Using the Face of the ICC, Is the Moral Judge of Israels Actions? 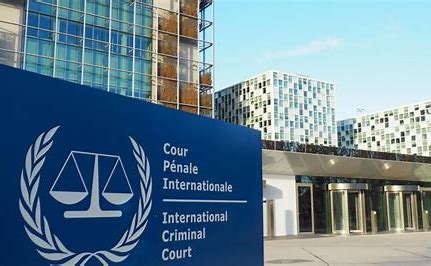 The International Criminal Court’s chief prosecutor Fatou Bensouda has said the court may look into the current fighting between Israel and Gaza as part of its current probe into alleged war crimes in the region, the Reuters news agency reported Thursday.

“These are events that we are looking at very seriously,” Bensouda said, adding that “we are monitoring very closely and I remind that an investigation has opened and the evolution of these events could also be something we look at.”

Since Monday, Gaza terror groups have fired some 2,000 rockets and mortars toward Israel. The Israeli military in turn has struck hundreds of sites in the coastal enclave, as Prime Minister Benjamin Netanyahu vowed to exact a “very heavy price” from Hamas, the Gaza-ruling terror group.

With the IDF carrying out multiple airstrikes on terror targets in the Gaza Strip, the Hamas-run Gaza health ministry has said 119 Palestinians have died in the fighting, 27 of whom it says were children.

Israel maintains that most of those killed in Gaza were terror group members or, in a few cases, died from errant Palestinian rockets that landed inside the Strip. 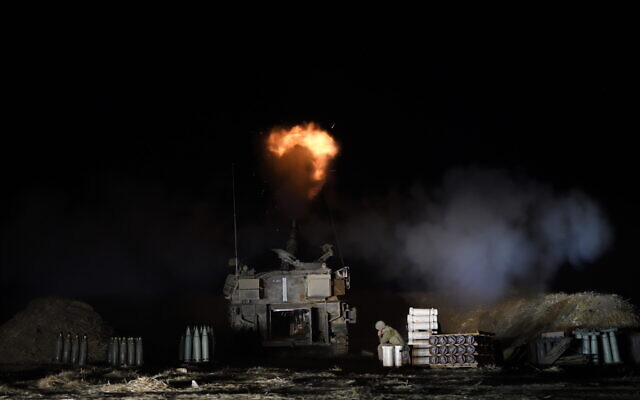 An IDF artillery unit fires toward the Gaza Strip near the Israel-Gaza border in Southern Israel, May 13, 2021. (Gili Yaari /Flash90)

The death toll in Israel since the fighting started reached nine, including an 87-year-old woman who slipped and fell while sirens warned of rockets fired by terrorists in the Gaza Strip.

In January, Israeli officials had blasted the court over its intention to hold an investigation, with Netanyahu slamming the ICC’s “outrageous” decision during a speech for Holocaust Remembrance Day.

“The Jewish people were defenseless in the face of the Nazis but are no longer so, and have every right to defend themselves from their enemies,” he said.

The ICC, he noted, was formed in the image of the courts of the Nuremberg trials that brought Nazis to justice. But “from Nuremberg to The Hague things were turned upside down. A body formed to defend human rights has become a body that in actuality defends those who trample on human rights.”

Bensouda announced on March 3 that she was opening an investigation into actions committed by Israel and the Palestinians in the West Bank, Gaza, and East Jerusalem since June 13, 2014. The announcement of the investigation came less than a month after the court ruled it had the jurisdiction to open a probe. A preliminary investigation to settle the justiciable question took more than five years.

The ICC announcement followed a request by the Palestinians, who joined the court in 2015 after being granted non-member observer status in the United Nations General Assembly. 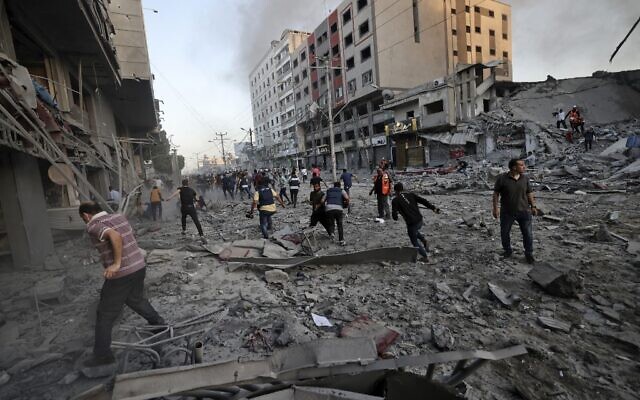 Rescuers and people gather amidst the rubble in front of al-Shourouk tower that collapsed after being hit by an Israeli air strike, in Gaza City, on May 12, 2021 (Mohammed ABED / AFP)

Israel has fiercely condemned the investigation, accusing the ICC of bias, noting that it is demonstrably capable of investigating any alleged Israel Defense Forces crimes through its own legal hierarchies, and saying the ICC has no jurisdiction since the Palestinians do not have a state. Israel is not a member of the ICC, but its citizens could be subject to arrest abroad if warrants are issued.

The ICC probe was previously expected to focus on three main areas: the 2014 war between Israel and Hamas; Israeli settlement policy; and the 2018 Great March of Return protests, a series of violent demonstrations along Gaza’s border with Israel that left dozens of Palestinians dead.

The probe will also look at terrorist rocket fire from Gaza at civilian areas in Israel.

Israeli observers noted the significance of the timing of the investigation’s span: On June 12, 2014, Hamas terrorists kidnapped and murdered three Israeli teenagers in the Gush Etzion area of the West Bank. Bensouda’s investigation — based on the request submitted by the so-called State of Palestine — is set to focus on events beginning from the following day.

The brutal terror attack, which horrified Israelis and drew international condemnation, was a pivotal moment in the lead-up to the fighting in Gaza later that summer. With the investigation set to consider events beginning on June 13, 2014, the crime could be excluded from the court’s investigation. 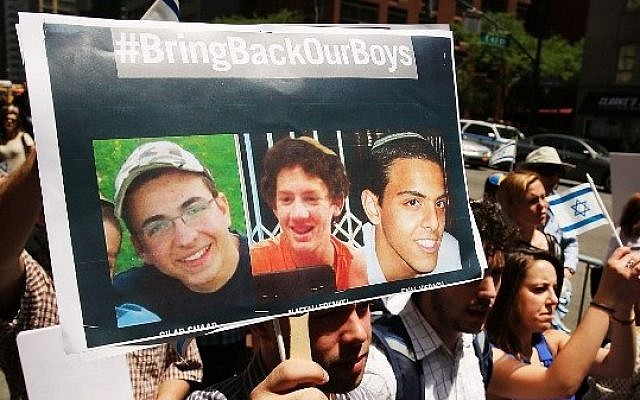 People gather for a vigil for the three missing Israeli teens outside of the Israeli Consulate on June 16, 2014 in New York City. (Spencer Platt/Getty Images/AFP)

Bensouda is to be replaced as prosecutor in June by British lawmaker Karim Khan. Israel reportedly hopes Khan may be less hostile or even cancel the probe.

In April, the Biden administration lifted sanctions and a visa ban on Bensouda and another senior court official, which former US president Donald Trump imposed last year after she launched an investigation into alleged war crimes by US military personnel in Afghanistan.

The new administration has continued to oppose the Afghan probe, as well as the investigation into alleged war crimes in the Palestinian territories by Israel and Palestinian terror groups. The US, like Israel, is not a member of the ICC.