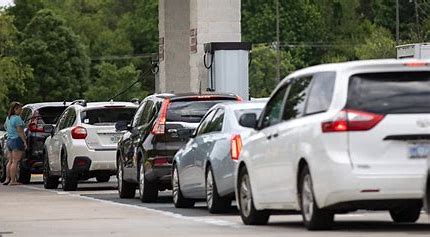 In the meantime, all of the mid-Atlantic states are experiencing unprecedented gas shortages. Lines and waiting times of 2 or more hours to get tanks filled; if you can find a gas station that is not on complete empty.

The shortages being experienced are beginning to spread to other states. This really should comer as no surprise to the American public; if you have been paying attention to the news.

As soon as Mr. Biden walked into the Whitehouse after the inauguration, he proceeded with over a hundred executive orders mostly focused on eliminating those executive orders promulgated by former President Trump.

Amongst them was the shutdown of the Keystone XL pipeline which supplied crude oil from Canada to the East Cost of the US. He also cancelled all fracking, and eny oil production on federal land and Indian Reservations.

These Executive orders eliminated over 20% of US oil and gas production. Additionally, there was the recent hacking of a pipeline source of gasoline and fuel from Texas to the east coast, which has still not been re-installed.

Absolutely NONE of this was reported by the main stream propaganda news outlets. In NJ itself, local politicians have been pushing legislation in Democrat controlled Assembly’s and Senates to eliminate off-shore drilling which will further cause gas and oil shortages in the US.

As we have reported earlier, this isn’t just stupidity. This is a direct and purposeful plan to dismantle the infrastructure and the economy of the US.

You will all be having Primary’s and Elections soon. YOU MUST VOTE OUT ALL DEMOCRAT GANGSTERS FROM OFFICE. EVEN THOSE SUPPORTED BY THE PHONY LAKEWOOD VA’AD

View this video for a further explanation of 18 going on, by Tucker Carlson of FOX News.

4 thoughts on “NY Times Says, Gas Shortages that are Reported are ‘Conspiracy Theories’”