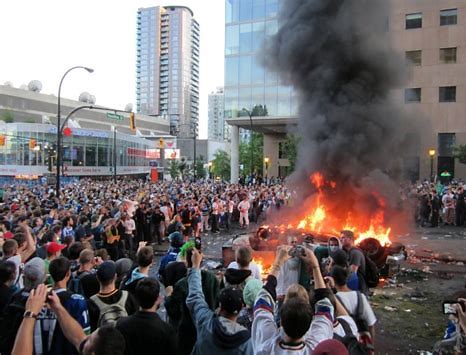 PM’s position echoed by president Reuvin Rivlin, who said a civil war would be ‘a danger to our existence’

Israel’s political leaders have said violent street clashes between Jews and Arabs inside the country pose a bigger threat than the escalating military conflict with Gaza.

The country’s prime minister, Benjamin Netanyahu, visited the town of Lod, where there has been rioting, burning of cars, destruction of property and violent attacks on individuals.

“We have no bigger threat now than these pogroms, and we have no choice but to restore law and order via determined use of force,” he said. In an earlier statement he said the country was fighting a battle “on two fronts”.

Israel’s president, Reuven Rivlin, said “a civil war [would] be a danger to our existence, more than all the dangers we have from the outside.”

Intercommunal violence, including beatings, stabbings, shooting and arson, has been reported across the country, from Beersheva in the southern Negev to Tiberias and Haifa in the north. A television journalist was attacked in Tel Aviv.

More than 400 people have been arrested, and border police have been redeployed from the occupied West Bank to towns inside Israel. “We’re in an emergency, the defence minister, Benny Gantz, said in a statement.

The opposition leader, Yair Lapid, said there had been a “complete loss of control”. He accused Netanyahu of “leading us to anarchy”.

“Jewish and Arab rioters have declared war on Israel, and there’s no response, no government, no police, no leadership,” he said.

Lod was closed off from Thursday afternoon, and an overnight curfew imposed. Netanyahu said people involved in clashes could be indefinitely detained without charge, a practice known as administrative detention.

As the authorities struggled to gain control, thousands of Israeli troops were deployed to the Gaza border. Military plans for a possible ground operation in the Hamas-controlled territory were expected to be put before political leaders on Thursday evening.

The Israeli military told its forces to “prepare for battle”. It called up 7,000 reservists, and cancelled leave for all combat units.

Both sides continued to fire rockets and missiles throughout the day. In Gaza, shops, restaurants and parks that would normally be packed for the Muslim festival of Eid al-Fitr were deserted.

The Israeli military said it had hit a main command centre where dozens of Hamas operatives were conducting surveillance, and four apartments from which senior commanders directed rocket attacks.

Hamas said it had launched a number of “suicide drones” into southern Israel. The drones lock onto targets before releasing explosives. Warning sirens sounded almost continuously through the day in towns in southern Israel as Palestinian militants fired hundreds of rockets.

More than 1,700 rockets have been fired from Gaza since Monday, according to the Israeli military. It said a third had fallen inside Gaza, and the Israeli defence system Iron Dome has intercepted most of the rest.

The US president, Joe Biden, said there had “not been a significant overreaction” by Israel to the Hamas rocket attacks. “The question is how, how we get to a point, they get to a point, where there is a significant reduction in the attacks, particularly the rocket attacks that are indiscriminately fired into population centres,” he told reporters at the White House.

British Airways joined several US and European airlines in suspending flights to Ben Gurion airport on the outskirts of Tel Aviv over concerns about rocket fire from Gaza.

“The safety and security of our colleagues and customers is always our top priority, and we continue to monitor the situation closely,” BA said. Israel redirected some flights to Ramon airport near the Red Sea resort of Eilat.

Abu-Ubaida, a spokesperson for Hamas’s military wing, the Izzadin al-Qassam Brigades, claimed that an Ayyash rocket with a range of 250km had been launched towards Ramon airport. The local council said a rocket had landed in the area.

The Russian president, Vladimir Putin, and the UN secretary general, António Guterres, called jointly for an end to the fighting.

“The primary task is to stop violent actions on both sides and ensure the safety of the civilian population,” the Kremlin said in a statement after a video call with Guterres.

Israel had rejected a Hamas proposal for a ceasefire, Netanyahu told the Israeli cabinet on Wednesday evening. The offer of a truce had been via the Russian foreign ministry, which quoted a senior Hamas official as saying the Islamist group was ready to halt attacks on a “mutual basis”, Ynetnews reported.

In Jerusalem’s Old City, tens of thousands of worshippers gathered at the al-Aqsa mosque at dawn to mark Eid al-Fitr. Some waved Palestinian flags and a banner showing an image of the Hamas leader, Ismail Haniyeh.

The streets of the ancient port of Jaffa were largely empty. Sally Abed, a member of Standing Together, a Jewish-Arab social movement, said local residents had felt increasingly threatened by Jewish settler groups that have sought to buy houses or evict Palestinians from their homes as part of a nationalist effort to take over the neighbourhood.

The gentrification of the area had a “flavour of ethnic cleansing”, she said. When residents protested, police had responded with excessive force, she added.

One thought on “Mob Violence a Bigger Threat to Israel than Gaza, says Netanyahu”