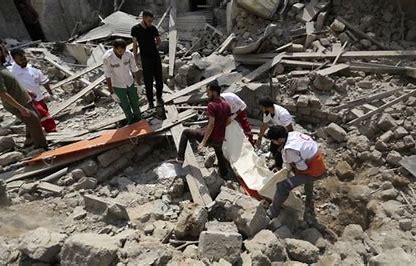 Military says 160 aircraft dropped 450 missiles on 150 targets in operation, as ground troops in Israel struck terror operatives who try to attack them

Some 160 aircraft flying simultaneously conducted a massive attack on a network of tunnels dug by the Hamas terror group under the northern Gaza Strip around midnight Thursday in the largest Israeli strike since the outbreak of fighting earlier this week, the military said Friday.

According to the Israel Defense Forces, in this air campaign, which lasted nearly 40 minutes, some 450 missiles were dropped on 150 targets in northern Gaza, particularly around the city of Beit Lahiya. The military said it was still working to determine the extent of the damage caused to the underground infrastructure, which IDF Spokesperson Hidai Zilberman told reporters was a “strategic asset” to Hamas, and the number of terrorist operatives killed in the strikes.

In addition to the aerial assault, Israeli tanks, artillery cannons and infantrymen on the Gaza border conducted accompanying barrages at Hamas operatives — specifically anti-tank guided missiles and rocket-launching teams — who came out during the assault to conduct attacks on Israeli targets, Zilberman said.

He clarified that the ground troops remained on Israel’s side of the border and did not enter the Gaza Strip, despite earlier claims to the contrary by the IDF, causing incorrect reports of a ground invasion to spread through leading news outlets around the world. The spokesman said the military was investigating what caused the “miscommunication.”

In total, some 500 artillery shells — some flares and some explosive — along with 50 tank shells were fired during this subsequent bombardment. Palestinians in Gaza reported that the Israeli strike lasted over an hour and caused a number of casualties, though an exact tally was not immediately available. 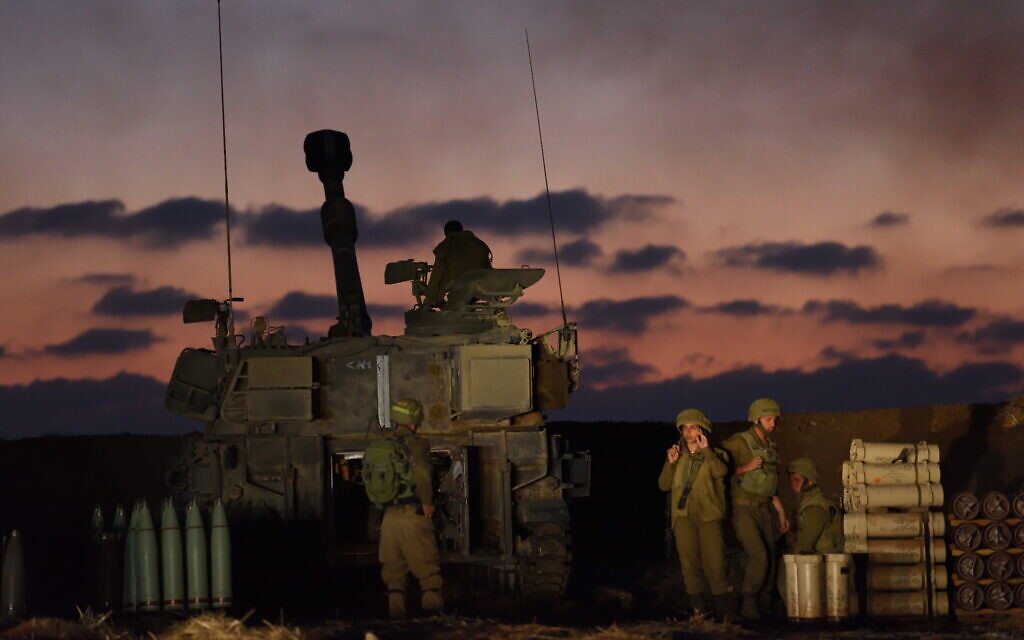 An IDF artillery unit near the Israel-Gaza border in southern Israel, May 13, 2021. (Gili Yaari /Flash90)

Zilberman said the operation was the result of large amounts of intelligence and careful planning. The military released video footage (above) showing both its preparations for the attack and some of the strikes themselves on the tunnel network, which the IDF refers to as “the metro.”

The Hamas-run Gaza health ministry on Friday morning raised its total death toll to 115 Palestinians, 27 of whom it said were children. These updated figures did not appear to include all those killed in the IDF’s midnight attack. Israel maintains that most of those killed in Gaza were terror group members or, in a few cases, died from errant Palestinian rockets, including several of the children. 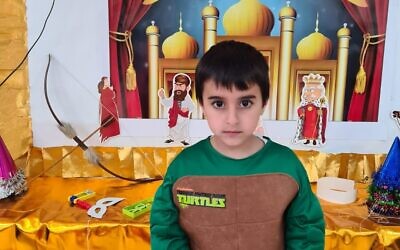 Shortly after the start of the assault, Prime Minister Benjamin Netanyahu vowed to exact a “very heavy price” from Hamas, the Gaza-ruling terror group which has fired upwards of roughly 2,000 projectiles at Israel since Monday afternoon, killing nine people, including a 5-year-old boy hit by a rocket fragment in Sderot, an 87-year-old woman who suffered a head injury while running to a bomb shelter, a 50-year-old woman who fell while rushing to a bomb shelter on Tuesday and was pronounced dead Friday, and a soldier hit by an anti-tank guided missile on the Gaza border. Dozens of Israelis have also been injured, and a number of elderly Israelis have also suffered heart attacks brought on by air raid sirens.

One rocket directly struck a building in the city of Ashkelon, seriously injuring a 60-year-old man, Israeli authorities said. A 90-year-old man in the same building was lightly injured after he hit his head while running to a bomb shelter, medics said.

Some of the incoming projectiles were intercepted by the Iron Dome missile defense system, several landed in open areas where they caused no injuries, and a small number landed inside populated areas, causing damage.

Minutes after the IDF onslaught began, Netanyahu issued a statement promising the operation would continue as long as needed to punish Hamas.

“I said that we would exact a very heavy price from Hamas and the other terrorist organizations. We are doing so and we will continue to do so with great force,” he said. “The last word has not been said and this operation will continue as long as necessary in order to restore the quiet and security to the State of Israel.

The IDF’s campaign in Gaza has so far been conducted primarily by airstrikes, as well as artillery shellings from the ground and the sea, but the military said it was preparing for the possibility of a ground incursion.

Zilberman said plans for a ground invasion were presented for approval by the IDF General Staff on Thursday, at which point they were given to Israel’s political leadership for consideration.

However, Israeli defense officials have made clear that the goal of this current Gaza campaign, known as Operation Guardian of the Walls, was not to topple the Hamas terror group, but only to weaken the group significantly and restore deterrence to prevent future attacks.

In total, the IDF on Friday said it had so far bombed more than 750 targets in the Strip since the outbreak of fighting, including many dozens of terrorist operatives and several senior commanders; four high-rise buildings used, at least in part, as Hamas military facilities; dozens of tunnels and bunkers; and nearly 200 buried rocket launchers, according to Israeli Air Force statistics.

The military has also destroyed dozens of rocket production facilities, some of which the IDF believes will take years to replace.

International efforts to broker a ceasefire, mostly led by the Egyptian military and the United Nations, have not made significant progress, as Israeli leaders have said they plan to continue the operation until it has achieved its goals. 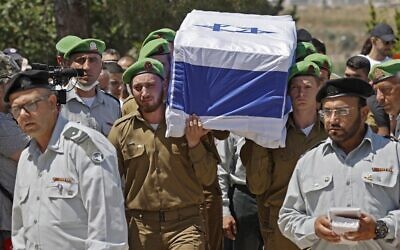 Mourners attend the funeral of Israeli soldier Omer Tabib, 21, in Elyakim in northern Israel, on May 13, 2021. Tabib was killed when Palestinian terrorists in Gaza fired an anti-tank missile near the border. (JACK GUEZ / AFP)

According to the IDF, some 2,000 rockets and mortar shells have been fired toward Israel by terror groups in Gaza since fighting broke out on Monday evening, including 220 projectiles launched between 7 p.m. Thursday and 7 a.m. on Friday. Around 330 of the total projectiles launched landed inside the Palestinian enclave, and in at least one case killed a number of children when the rocket hit a school.

The majority of the rockets have been fired toward southern Israel, particularly the city of Ashkelon, which has been pummeled in this round of fighting, as well as the town of Sderot and small communities surrounding the Strip, known as the Gaza periphery. Hundreds of rockets have also been fired toward central Israel, at the Tel Aviv metropolitan area, including Ben Gurion International Airport.

In light of the attacks, Israel closed the Tel Aviv-adjacent airport to incoming passenger flights, diverting them to Eilat’s Ramon Airport. Hamas said it subsequently targeted that airfield as well, though its attack fell far short of the city.

Hundreds of the projectiles fired from Gaza have been intercepted by Iron Dome missile defense batteries, according to the military, which refuses to give precise statistics on the matter as they could be used by terror groups to find ways to outmaneuver the system.

The IDF on Thursday said the air defense system had a roughly 90 percent interception rate of projectiles heading toward populated areas, stressing that it did not provide “hermetic” protection. Terror groups have been launching rockets in massive barrages to try and overwhelm the system. A number of rockets in these barrages have made it past the Israeli air defenses in this way.Volume 90%00:0900:09More Videos

Hamas also said it had launched a number of “suicide drones,” unmanned aerial vehicles carrying explosive payloads, into southern Israel from the Gaza Strip and out to sea, in an apparent effort to strike Israel’s Tamar natural gas rig, which was depressurized and put temporarily out of service toward the start of the fighting this week. The military confirmed downing at least six such drones as of Friday morning, including with an Iron Dome missile defense battery, in the first known use of this system, which was initially designed to intercept only rockets. In one case, a drone heading out to sea was shot down using an F-16 fighter jet, the military said.

On Thursday, the IDF said it bombed seven Hamas cells preparing to launch anti-tank guided missiles at targets in southern Israel over the course of the day, striking the teams before they could carry out their attacks. The military said it also hit an anti-tank guided missile launcher that had been positioned on an apartment building in the southern Gaza Strip.

The IDF in recent days has deployed additional ground troops — from the Paratroopers Brigade, Golani Infantry Brigade and 7th Armored Brigade — to the Gaza border, sending with them tanks and armored personnel carriers, which could be seen being transported by trucks on highways throughout southern Israel.

On Thursday, the army said it was canceling all weekend leave for combat soldiers as it prepared for the possibility of a ground operation. Zilberman said the military had called up 7,000 reservists. Roughly half of those were troops from air defense, artillery and medical units, and half serve in administrative and intelligence positions, Zilberman said.

Israel has fought three large operations against Hamas and other terror groups in the Gaza Strip since 2008, most recently in 2014 with a 51-day war known as Operation Protective Edge, as well as over a dozen smaller battles.