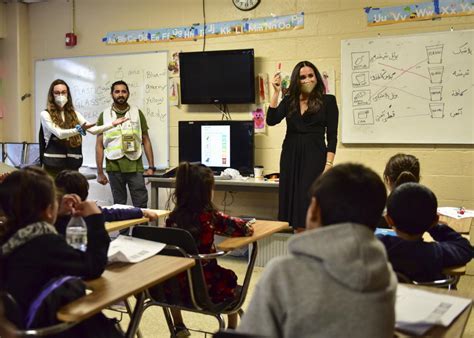 JOINT BASE MDL – It took a visit from Prince Harry and Meghan Markel, the Duchess of Sussex to give New Jersey residents their first look inside a refugee camp as Joint Base MDL, and what they saw was upsetting to many. That village is called Liberty Village and it’s where up to tens of thousands of Afghan refuges are being housed by the federal government.

A series of photos that were shared with the media today by the Department of Defense during the royal visit show a classroom full of children unmasked, with no face masks on their desks or in their hands.

Those pictures irked some New Jersey parents on Twitter who say it’s not fair that immigrant children are not subjected to the same face mask rules imposed on their own children by New Jersey Governor Phil Murphy.

While American citizen children in New Jersey, under New Jersey Governor Phil Murphy’s COVID-19 public school mask mandate, are forced to wear face masks in school, over on the joint base a few miles away, Afghanistan immigrant children have no such requirement, it appears in the photos released this weekend.

Because, you know, science.

Once again, the inconsistency of New Jersey Governor Phil Murphy and the federal government’s guidance when it comes to COVID-19 safety is sending mixed messages to everyone.

In photos released by the U.S. Department of Defense, some adults and every child was captured maskless, inside a classroom, in clear violation of Governor Phil Murphy’s mask mandate for all students attending public schools.