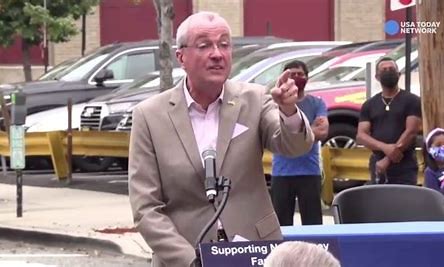 UNION, NJ – New Jersey Governor Phil Murphy took time out of his visit to Union for a bill signing ceremony to address protesters carrying signs that read “No Forced Injections”. The governor, who is edging closer to mandatory vaccinations in New Jersey as has been done in New York City let the protesters know how he felt.

JNews thinks, as we hope most New Jerseyans think, that if you give Murphy a second term thank ‘YOU SURELY HAVE LOST YOUR MIND.’

No doubt the mismanagement of Chris Christie as Governor contributed to the election of Phil ‘the weed man’ Murphy. But we wonder if it wasn’t partly his promise to legalize ‘Weed’ that brought about his ascent to the Governorship of NJ. And if that is the case, shame on NJ. But we hope to be rescued in November.

NO Sir!!! They have not lost their minds. CAN YOU ACTUALLY PROVE THAT YOU TOOK THE VACCINE? I’LL BET YOU DIDN’T