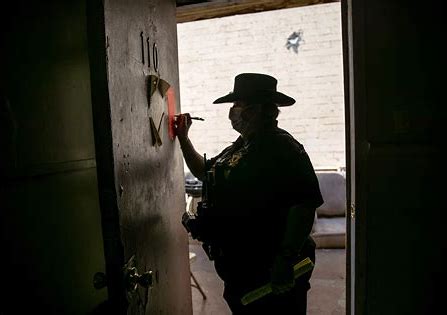 A federal judge in Washington, D.C., has ruled that the Centers for Disease Control overstepped its statutory authority in issuing a nationwide ban on tenant evictions. The eviction ban — initiated last June when Donald Trump was president — was extended by Joe Biden to June 30.

“The pandemic has triggered difficult policy decisions that have had enormous real-world consequences. The nationwide eviction moratorium is one such decision,” D.C. District Court Judge Dabney Friedrich, a Trump appointee, ruled on Wednesday.

It was always a point of contention whether or not the CDC had the authority to impose such rules on interstate commerce. Judge Friedrich wrote that the act of Congress that governs the CDC contained no such authority.

“It is the role of the political branches, and not the courts, to assess the merits of policy measures designed to combat the spread of disease, even during a global pandemic,” the order stated. “The question for the Court is a narrow one: Does the Public Health Service Act grant the CDC the legal authority to impose a nationwide eviction moratorium? It does not.”

The judge’s ruling does not affect the numerous state and local bans on evictions, although any legal challenges to them have a much greater chance of success now that the federal courts have weighed in.

In fact, in two other cases challenging the evictions, landlords came out on top.

The court filing was one of several in the past year involving property owners under financial duress due to the moratorium reached this year to challenge the blanket freeze. For instance, U.S. District Court Judge J. Philip Calabrese in Ohio decided in March that the CDC lacked the legal authority to issue the nationwide freeze. Just two weeks prior, federal Judge J. Campbell Barker in the Eastern District of Texas came to the same conclusion. The Justice Department has launched an appeal to Barker’s ruling.

The Biden Justice Department has already indicated it will appeal the ruling. But the CDC order is expiring on June 30, which could mean Biden is looking to extend it once again.

There is absolutely no consideration whatsoever given by state and local governments for the small independent landlord who can’t stay in business unless his tenants pay the rent.

Dean Hunter of the Small Multifamily Owners Association on WMAL radio in D.C.:

We’ve had situations where individuals with guns, individuals, shootings. There’s tenants who’ve thrown blood on the wall, all kinds of indescribable things. … People cannot be evicted who are terrorizing the community, terrorizing tenants and property owners. The D.C. council has totally overreacted. The D.C. moratorium doesn’t even expire until 60 days after the federal emergency.”

The eviction moratorium has already wreaked havoc on the industry. It’s likely that when the dust settles, there will be fewer rental units and more tenants looking for places to live.