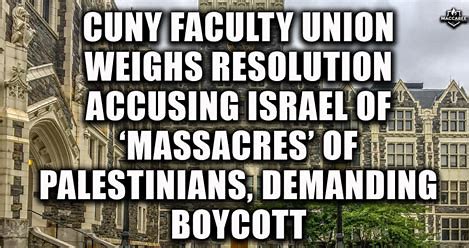 Resolution is “unprecedented” in its “viciousness” says history professor.

CUNY, includes a number of colleges in the City of NY that are under a general umbrella organization called CUNY, (City University of NY) most notably Brooklyn College, City University (Manhattan) Hunter College, Queens College and many more including most of the Community Colleges located in the city of NY. The faculty union of the City University of New York (CUNY) will vote on Thursday on a resolution that endorses the Boycott, Divestment and Sanctions (BDS) movement and accuses Israel of “crimes against humanity” and “ongoing settler colonial violence.”

Besides calling on the union to endorse BDS, the resolution states, “Be it resolved that PSC-CUNY condemn the massacre of Palestinians by the Israeli state.”

The motion was put forward to the Professional Staff Congress (PSC) union by the Anti-Racism Committee, International Committee and Academic Freedom Committee, reported the Algemeiner.

In an article for the socialist website leftvoice.org CUNY professor James Hoff wrote that the resolution – “unprecedented in our union’s history” – also calls on CUNY to divest “from its more than $1,000,000 of investment in firms and weapons manufacturers directly involved in the occupation of Palestine” and that “we also want to urge our union to treat this resolution, not as an end in itself, but as the beginning of a more robust struggle in defense of the Palestinian people and against U.S. military and economic support for the state of Israel.

He also wrote that the resolution does not call for a full boycott of Israel, stating that he wishes to amend the resolution to include, “Be it further resolved that the PSC demands an immediate end to all U.S. economic and military aid to the state of Israel, and that the PSC commit itself to building a labor movement to force the U.S. state to end such support for Israel.”

He also lamented the fact that the union’s executive had opposed the resolution and presented an alternative “water-down” text which was highly critical of Israel but did not advanced endorsement for BDS.

The union’s resolution is “unprecedented in the viciousness of its text, but this is a union that has periodically condemned Israel for many years,” Brooklyn College history professor K.C. Johnson told the Algemeiner.

Brooklyn College is one of the colleges that make up the CUNY system.

CUNY has in the recent past been accused of ignoring campus anti-Semitism.

In April, CUNY’s student senate voted down a resolution to adopt the IHRA definition of anti-Semitism.