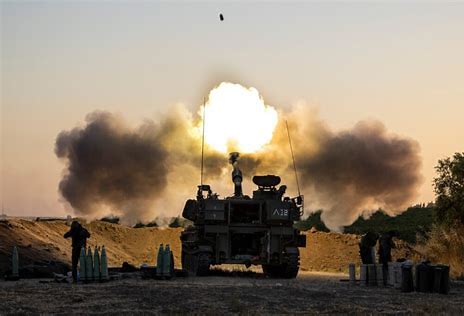 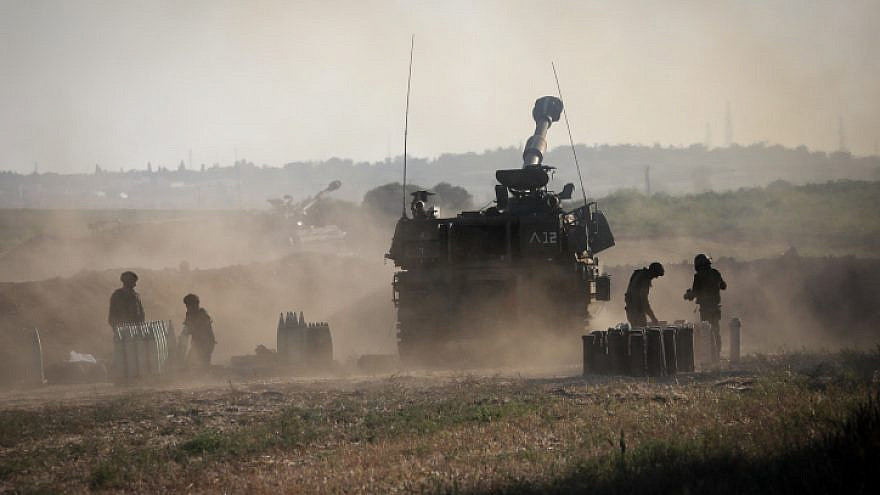 The Israel Defense Forces Artillery Corps fires into the Gaza Strip near the Israeli border on May 19, 2021. Photo by Olivier Fitoussi/Flash90.

A ceasefire between Israel and Hamas is unlikely to take effect before Friday, Channel 22 reported on Wednesday, following a situational analysis held by Israeli defense chiefs.

Hamas announced that it was withdrawing from its agreement to observe an Egyptian-mediated calm. Israel reportedly told the Biden administration that international pressure for a truce “strengthens Hamas and delays the ceasefire” after U.S. President Joe Biden told Israeli Prime Minister Benjamin Netanyahu that he wanted to see a significant de-escalation on Wednesday.

A senior IDF officer shed some light on Israel’s military strategy on Wednesday, stating that the IDF’s Southern Command spent years preparing itself for war, while also using the time to disrupt Hamas’s force build-up and to foster economic humanitarian assistance to Gaza.

“Hamas’s force build-up process is the problem,” he said.

To stop a new escalation in the near future, it is vital to work to prevent Hamas from rearming, said the source. “Israel is working almost by itself on this issue,” he added.

In mapping out Hamas’s multiple identities, the source said it is a military-terrorist entity, a political regime, a religious organization and an international organization all at the same time.

But at its core, it is a military-terrorist entity since it would not have taken the risk of firing on Jerusalem has it prioritized the welfare of the Gazan people, he added.

“Hamas wants to take over Judea and Samaria, and the Palestinian Authority. It tried to do this politically. When elections failed, they tried to minimize the power of [P.A. leader Mahmoud] Abbas by creating an impact in Jerusalem, and in Judea and Samaria,” said the official.

By issuing calls for Palestinians to attack and kill Israelis in Jerusalem, Hamas was maneuvering politically against the P.A. as well, he explained, taking the lead in the Palestinian arena.

“Of course, Hamas’s ideological relations with Iran is a concern. We are speaking a lot about the need to push back Iran from this area because it brings instability,” he stated.

Israel prepared well for this confrontation and while the situation has not always gone the way it would like, the operational planning has proven itself, the source stated.

Meanwhile, Gazan terror factions continued to fire rockets at southern Israel on Wednesday, while a number of rockets were also fired at the north from Lebanon.

Sirens sounded in the Lower Galilee and Krayot region in the north before the Iron Dome air-defense system intercepted one rocket from Lebanon and three more fell in open areas, the IDF said in a statement. There were no reported injuries.

In retaliation, IDF artillery guns struck a number of targets in Lebanon.

IDF has hit 1,000-plus military targets

Since the start of “Operation Guardian of the Walls” on May 10, Hamas and Palestinian Islamic Jihad fired some 4,000 rockets at Israel. Some 600 of those fell inside the Gaza Strip, causing both civilian deaths and structural damage.

The IDF has attacked more than 1,000 military targets throughout the Gaza Strip. Iron Dome has maintained an intercept rate of approximately 90 percent.

Also on Wednesday, the southern cities of Ashdod, Ashkelon and Netivot came under rocket fire. Before that, Rehovot and the surrounding area were targeted by rockets.

There were no reported injuries, although a rocket exploded on the Route 4 highway near Ashdod.

Beersheva came under multiple rocket attacks as well on Wednesday, causing shrapnel to fall in the city.

The IDF continued its strikes against military-terrorist targets related to Hamas and Palestinian Islamic Jihad throughout the day.

The target was struck by Israeli fighter jets, the IDF stated.

“The hideout apartment was used by the terror operatives for offensive cyber activity against Israeli targets. These actions are clear proof of Hamas terror activity in the cyber domain. The apartment was located adjacent to a kindergarten, proving once again that the Hamas terror organization deliberately endangers civilians by placing its military infrastructure in the heart of densely populated civilian areas,” it said.

One thought on “Ceasefire Reportedly ‘not before Friday,’ as Rockets, Israeli Air Force Strikes Persist”