Why The Police Broke Down The Door To This Synagogue 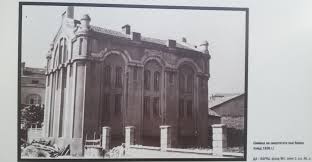 Members of the small Jewish community of Varna, Bulgaria were horrified this month when police came to knock down the door of their one and only synagogue Members of the small Jewish community of Varna, Bulgaria were horrified this month when police came to knock down the door of their one and only synagogue. Varna’s synagogue is a beautiful and historic site which survived the Nazis, and sat empty until Jews returned a decade ago. The Rav of the synagogue is Rabbi Yosef Halperin, a young father and kiruv rabbi who has dedicated his life to outreach. In the ten years since the Halperins’ arrival, they have hosted thousands and generated a Jewish community where there was once nothing.

Readers can donate here to help stop the defiling of the synagogue.

Their journey hit a major roadblock at the end of 2020, however, when the synagogue was purchased by a local non-Jew. Plans are now underway for the site to become a casino. Halperin and his congregants have been evicted from the synagogue, and the community which was held together by the cultural center has already begun to dissolve.

Halperin is extremely concerned that the end of the Varna synagogue will be the end of the Varna community. His family are haunted by images of young European partiers, gambling and dancing on their bima, with their aron kodesh, with the other fixtures of the building which hold so much more meaning than the aesthetics they have been purchased for.

For the next month only, there is an opportunity for the contract to be purchased back, so that the synagogue can be saved. The expenses, however, are far beyond that of the young kiruv family and their eclectic congregants. Donations are being urgently collected to preserve the dignity of the historic synagogue, and save the future of the community it has been home to.

Readers can donate here to help stop the defiling of the synagogue.