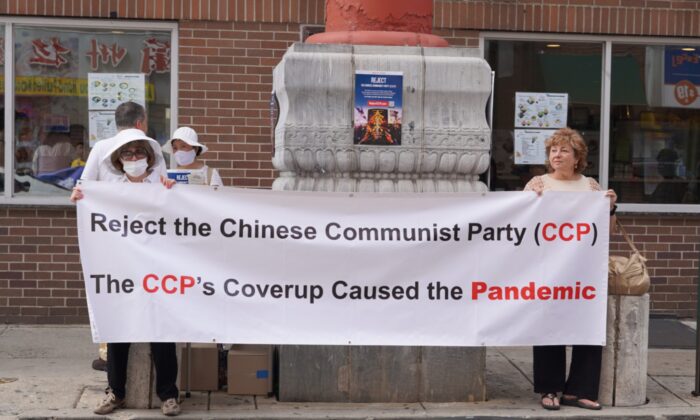 Dozens of people rallied in Philadelphia’s Chinatown on Aug. 8, with a theme to expose the Chinese Communist Party (CCP)’s atrocities and raise awareness of the dangers of socialism and communism.

The gathering was in support of the 380 million Chinese people who have relinquished membership with the CCP and its affiliated organizations over the past 16 years. It was also intended to encourage local Chinese people to withdraw from the CCP and disintegrate it, according to Alex Luchansky, the event organizer and software engineer manager at a financial company.

The rally drew lots of attention from residents and tourists with public speeches, banners, and pamphlets. Several people stopped to share the harrowing experiences that they and their families endured under communist regimes.

“We arranged this event to speak out against the Communist Party, to call for stopping all the atrocities that are happening in China and the infiltration of red ideology around the world,” said Luchansky, who himself grew up in a communist country in Eastern Europe.

Hui Zhen, a former middle school principal, shared her story of humiliation and suppression under the Chinese communist regime.

Her grandparents participated in the Xinhai Revolution in 1911, which ended China’s last imperial dynasty, the Manchu-led Qing dynasty, and resulted in the establishment of the Republic of China on Jan. 1, 1912. However, having been manipulated by the Communist Party’s lies to protect and support the people of China, Hui’s grandparents chose to stay in the mainland when the CCP usurped power over the Kuomintang (KMT)’s Nationalist Government in 1949. Later, during the Cultural Revolution, her father was forced to wear a clown hat and had his head shaved as a form of humiliation. He was vigorously denounced in public gatherings and detained, and his home was ransacked many times.

A brother of one of Hui’s grandparents had a son imprisoned for more than 20 years and tortured to death. This same relative’s daughter, once a professor and head of the Department of Foreign Languages at Harbin People’s Liberation Army Military Engineering College, was categorized as “counterrevolutionary” and was persecuted. Another daughter, a professor at Nanjing University, committed suicide because she couldn’t bear the family tragedy.

During the “Great Leap Forward” movement in 1958, Hui was convicted of speaking treasonous words and was denounced with the “Big Character Poster,” a primary form of propaganda and humiliation used by the CCP to display allegiance and expose betrayal by Chinese citizens.

In 1960, when Hui was banished to the countryside, she wrote a letter asking for approval to sit for the college entrance examinations but was criticized for “wanting to leave the countryside and thereby be incompatible with the working-class people. It would be considered imperialism if continued.” She was incredulous. “I was an excellent teacher in May, yet I would be considered an imperialist in June?”

During the Cultural Revolution, Hui witnessed professors being criticized, and their heads were beaten with belts until the point of bleeding.

Hui said that her tragic past gave her a profound understanding of the evil of the Communist Party and called on people to recognize the evil nature of this totalitarian government.

Fortune Amidst Misfortune Under Stalin’s Regime

Luchansky told the story of his grandfather, Leonid Luchansky, who was a Holocaust survivor from the former Soviet Union.

Leonid was captured by the Nazis while fighting for the Russians in Poland during World War II and held in a concentration camp for being Jewish, but miraculously managed to run away a day before being transferred to a death camp.

He tried to go back to rejoin the Russians in their fight against the Nazis after his escape. But under Stalin’s order, anyone who the Nazis captured must be shot, no matter whether he was captured or choose to betray the Russian communist government. As a result, a Russian soldier was ordered to take Leonid behind a bush and shoot him.

The soldier took him behind the bush but then said: “I am not going to kill you because I understand that the communist regime is evil. But I could not just disobey. You should run away, and I am going to shoot in the air.”

Leonid was fortunate to escape with his life. However, his ordeal was not over. Eventually, he was arrested by KGB officials, who tortured him, interrogated him, and later arranged for his execution for the crime of treason. But he was lucky again because at that time, Germany had surrendered, and the war was over. Amnesty finally came.

After he was freed, Russian officials sent Leonid very far away, as they didn’t want too many Jews in the area. He eventually ended up being in Lviv, Ukraine, where he worked in a small factory with a degree in Chemistry.

“Wherever a communist government is established, ordinary people suffer,” Luchansky told The Epoch Times. “As human beings, we have the duty to denounce crimes against humanity. So, my call for everybody around the world is to speak out, reject any communist party, and make sure we do everything to expose their crimes.”

The rally’s message caught the ear of Douglas Moyer, a teacher who lived in former East Germany. He told The Epoch Times what it was like for him to live under communist rule.

The Party of Democratic Socialism (PDS), which ruled East Germany until 1990, proved to be unyielding with any citizen who appeared to be out of step with its directives. The PDS used the Stasi secret police to arrest, interrogate, and imprison any East German citizens who did not conform. It is estimated that at its height in the 1980s, the PDS held around 200,000 political prisoners.

According to Moyer, communist China and the PDS are both failed experiments in a dictatorship because “both regimes had to rely on punishing their citizens who did not politically conform to their warped-minded Marxist political ideology.”

Moyer shared “a life-changing event” he experienced on May 7, 1989, in the former East German town of Weimar, where he was part of a Goethe Institute student walking tour that focused on indoctrinating the youth on the virtues of Democratic Socialism.

During lunch break that day, Moyer left his student group and explored Weimar on his own. During his hike on a nature trail that led into the woods, he came across a hidden Russian military campground with tanks, machine guns, and Russian sharpshooters who could crush any political protests or uprisings within minutes. As he approached the Russian military encampment, the gate opened, and a teenaged Russian soldier with fully loaded ammunition approached him in a monster-sized military jeep.

“I feared for my life just as everyday East German citizens feared for their lives for 40 years under Democratic Socialism if they did not conform,” Moyer recalled his horrible feeling at that moment.

“It is a shame to see the way that people felt like prisoners in their own country,” said Moyer, “I believe that we have God-given rights to pursue happiness and have the freedom to do so.”

“Sadly, today many uninformed Americans who have never lived in a socialist or communist country have become infatuated with the theory of socialism,” he said, “because they have been brainwashed with socialist ‘social justice’ propaganda in our public schools, universities, churches, and mainstream media.”

Moyer encourages his students to be critical thinkers and learn from history because “if we take the time to understand the dangers of socialism and communism in Cuba, the Soviet Union, North Korea, Venezuela, East Germany, and China, we can help avoid making the same mistakes in our country. History teaches us that it’s very easy to be a democratic socialist and communist in a free country, but it’s nearly impossible to be free in a communist and democratic socialist country.”

Moyer was impressed with people’s courage to denounce the CCP at the rally. “The people of China are wonderful people; the political system really is not good,” he said, “I am so encouraged to see the brave people today, their voices and support for freedom of Chinese people … I believe that the best days of China are ahead of them.”