Violence Rages in West Bank and Jerusalem, as Dozens are Injured in Police Clashes and Palestinian Attackers are Killed in Shootout 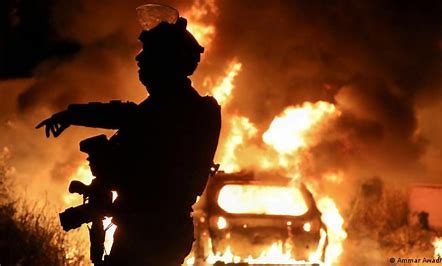 MAY 10, 2021
BY CNAAN LIPHSHIZAND GABE FRIEDMAN

(JTA) — Capping a day of violence across the country, Israeli police clashed with Muslim worshippers at the Temple Mount in Jerusalem. More than 50 Palestinians were wounded in the clashes, according to reports.

Earlier in the day, an Israeli soldier killed two Palestinian men and wounded another one in the West Bank in a shootout that security officials said thwarted plans to carry out terrorist attacks inside Israel.

The incidents are just two flashpoints in weeks of unrest surrounding the Muslim holy month of Ramadan. Israeli police had erected barriers around the Damascus Gate in the Old City of Jerusalem, which interfered with Muslim worshippers’ tradition of gathering at the gate and led to some of the most raucous protesting the city has seen in years. Two weeks ago, a crowd of far-right Israelis marched down Jerusalem streets chanting racist slogans, where they met and fought with a crowd of Palestinian counter-protesters.

Earlier this week, in separate incidents in the West Bank, a 19-year-old Israeli was killed in a drive-by-shooting and a 16-year-old Palestinian was killed by Israeli troops. A Palestinian man was arrested for the drive-by shooting.

Adding to the tensions in recent weeks are the pending evictions of multiple Palestinian families from the Sheikh Jarrah neighborhood of Eastern Jerusalem, an area that much of the international community views as illegally occupied by Israel. Jewish Israelis have long tried to buy real estate in the neighborhood, a symbolic stronghold near Jerusalem’s Old City, while forcing Palestinian residents to leave. Israel’s Supreme Court is set to rule on whether the evictions are legal in the coming days.

On Friday afternoon, tens of thousands of Muslim worshippers gathered at the Al-Aqsa Mosque at the Temple Mount, which is revered by Muslims as the Noble Sanctuary, for midday Ramadan prayers. Some were waving flags representing Hamas, the militant group that controls the Gaza Strip and frequently shoots missiles into Israeli territory.

After protesters began throwing rocks, bottles and other objects at Israeli police, officers retaliated, entering the revered holy site and clashing with protesters to disperse them, according to reports. Police threw stun grenades at the site, which appeared strewn with trash in videos taken at the scene.

The Times of Israel reported that over 50 Palestinians were wounded, 23 of them of hospitalized.

Meanwhile, near an Israeli army base in the West Bank, three Palestinians fired at Israeli border police inspecting a bus. The border police returned fire, killing two of the alleged assailants and seriously wounding the third one.

No Israelis were hit. The wounded Palestinian was taken to hospital where he remains in critical condition.

Authorities are bracing for more conflict on Sunday, which marks Ramadan’s Laylat al-Qadr or “Night of Destiny” and will feature large crowds of worshippers.