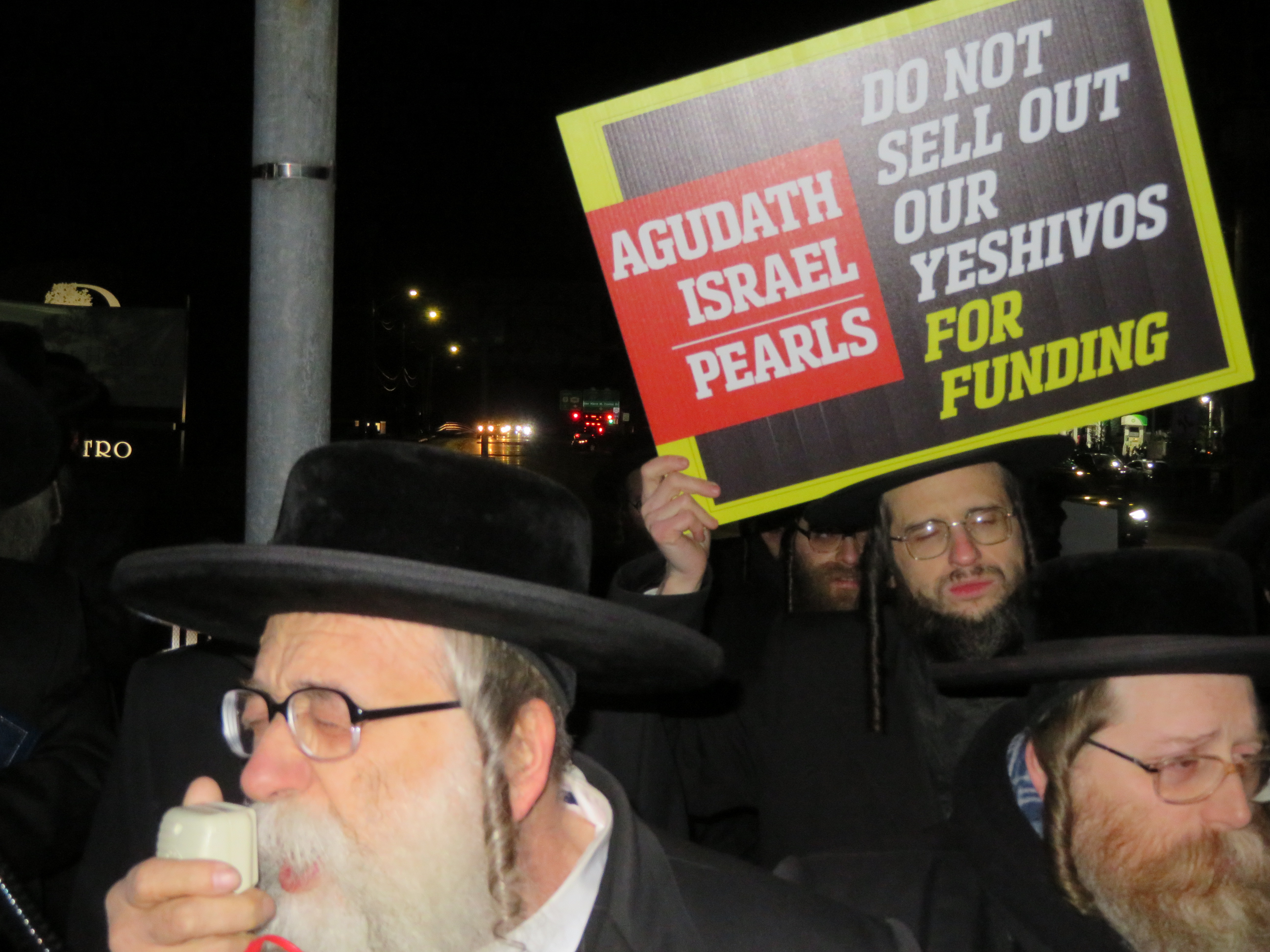 Many gathered to protest the Agudath Yisroel Yeshiva Summit, at the Sleepy Hollow Hotel and Conference Center- Proclaiming at loud that Agudas Yisroel do NOT represent or speak in the name of Orthodox Jewry.

Agudath Israel representatives were meeting with the assistant commissioner of the NY board of education to get her approval for an abridged curriculum for limude kodesh in the Jewish private schools.

One of the attendees said to JNews “the reason for this demonstration is that the NY government is trying to erase any mention of G-DS name and religious education. Lately they are coming after private schools as well to implement their curriculum. The government of course threatens to stopping funding. Jews mostly have all sacrificed their lives & money to never compromise in their Religion and Faith even on the smallest commandments or traditions.”

An attendee by the name of Rabbi Solomon Diamalt told JNews: “The USA used to be a beautiful country established with freedom of religion under G-D. Lately to our shock things started to change very dramatically as one freedom after another gets taken away under the guise of justice. Because this generation isn’t accustomed to this sort of tyranny many of us are falling without realizing. Orthodox Jewry Means sacrifice by definition, But this very new challenge on the horizon today unfortunately most religious people aren’t accustom to and therefore are not prepared for it. Many orthodox Jews are being poverty stricken from one side and getting easily coerced and manipulated from the other side. Then the “live and let live” side of people gets the better of them leaving them tricked to think, that the fake and bribed Jewish negotiators are working in their tradition and favor; therefore blindly following the bribed and evil Jewish negotiators. “

“Many of these Jews are simply blinded by the Big money that’s being funneled directly and indirectly to them and their institutions. Because they need the money and they are very well aware that we Jews would never ever compromise even from all these threats under any circumstance. They go ahead without ever being hired by the Jewish community; they go behind the Jewish Communities backs to the various departments of government and sell lies that we are willing to compromise on religion. It gets leaked out by individuals that know that stuff is going on behind our backs. Because these traitors are well fluent in Yiddish they are able to put on a front as if they are fighting for us to protect our religious freedoms and to stop them from mixing in with our religious education. They take on the role of being a big misrepresentation to the government in this and in many issues: Including the PEARLS and AGUDAH organizations Etc. openly lie to our Community leaders and parents saying that they are organized to fight against the government to protect our religion. They even go as far as requesting donations from poverty stricken Jewish families that were manipulated to think that they are using the money to protect us against the government when the exact contrary is true. But “one can not fool everyone all the time” many families that found out what’s going on removed their children and established smaller schools with 100% Kosher education.”

One thought on “Video & Pics: Protest of Agudath Israel and School Funding”