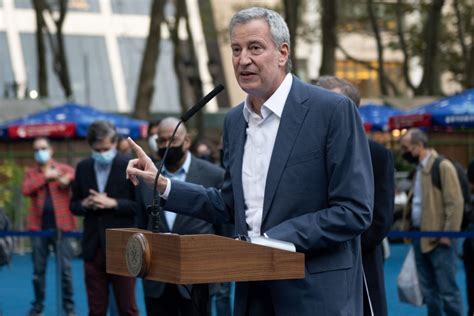 Children between ages 5 and 12 will be required to vaccinate otherwise be prevented from any public exposure. The Germany/Austria ‘EDICT’ has arrived way sooner than we thought it would

Mayor Bill de Blasio on Monday announced a COVID-19 vaccine mandate for all private businesses in New York City—one that will take effect days before he leaves office and with the city already recording among the highest vaccination rates and lowest infection rates in the nation.

De Blasio, whose mayoralty ends at the stroke of midnight on New Year’s Eve, declared making vaccines compulsory for private businesses a “preemptive strike” against an expected surge in COVID infections this winter amid the emergence of the Omicron variant.

“We’re going to announce a first-in-the-nation measure,” de Blasio said on MSNBC’s “Morning Joe.”  Hizzoner added that the mandate is aimed at “maximizing vaccination quickly, so we can get ahead of Omicron and all the other challenges we’re facing right now.”

The city so far has only seven known cases of the new variant, according to state data released Saturday.

The policy is scheduled to go into effect Dec. 27 — and it drew immediate rebuke from New Yorkers and the Big Apple’s business community.

Kathryn Wylde, head of the business group Partnership for NYC, said she was “blindsided” by the mayor’s announcement.

“There’s no forewarning, no discussion, no idea about whether it’s legal or who he expects to enforce it,” she said. “There’s been no consultation.

“We were blindsided,” she emphasized.

Wylde also questioned if de Blasio has the legal ability to implement the vaccine rule for private entities.

“It’s unclear by what authority the mayor is doing this,” said Wylde.

“Mayor de Blasio can’t leave fast enough. He has crushed small business, the economy and quality of life. How many more New Yorkers does he want to see move to the free state of Florida?” fumed Rep. Nicole Malliotakis (R- Staten Island/ Brooklyn).

“I’m hopeful the incoming mayor will roll back these arbitrary mandates.”Rep. Lee Zeldin (R-Long Island), a candidate in the 2022 race for governor, predicted the mandate would cost New York City jobs.

“When you dangerously combine a far-left, lame duck politician, who is anti-business, one dimensional, unaccountable, not bright and has a perpetual ‘I always know best’ attitude, you get Bill de Blasio, the worst mayor in America,” he said.  “There is no way this job-killing, small business-suppressing mandate is legal!”

“Bill de Blasio has decided to spend his last few weeks as a lame duck by trampling all over New Yorkers’ bodily autonomy. It was private schools last week, and now it’s private businesses. Our mayor doesn’t seem to understand what the word private means,” the newly elected lawmaker told The Post. “That is their right as Americans, and Mayor de Blasio has no business challenging people’s right to make their own health-care choices.”

Still, Dr. Dave Chokshi, the city’s health commissioner, during a subsequent virtual press briefing, insisted about the mandate, “I know it will save lives and help prevent unnecessary suffering.”

Currently, only municipal employees are subject to a COVID-19 inoculation requirement, which took effect for most city workers in late October and prompted backlash from members of the FDNY, NYPD and the city Department of Education.

Also Monday, de Blasio announced that two doses of a COVID-19 vaccine will be required to enter many indoor businesses in the five boroughs—including bars, restaurants and fitness centers. The current iteration of the “Key to NYC” program requires just one vaccine dose.

Additionally, de Blasio revealed that children ages five to 11 will soon be required to receive at least one shot in a vaccine series to enter indoor establishments, now that shots are available to them.  Previously, kids under 12 years old were able to accompany vaccinated adults in settings where proof of inoculation is mandatory to gain entry.

In response, a rep for Mayor-elect Eric Adams, who will take office Jan. 1, did not take a position on de Blasio’s controversial measure. “The Mayor-elect will evaluate this mandate and other COVID strategies when he is in office and make determinations based on science, efficacy and the advice of health professionals,” said spokesman Evan Thies.

Last month, a federal appeals court blocked President Joe Biden’s nationwide version of the private-sector vaccine requirement. The decision was subsequently upheld by the 5th US Circuit Court of Appeals.

In the five boroughs, several municipal unions, including the city’s largest representing police officers, filed lawsuits with the aim of reversing the city worker vaccine mandate. That came after a group of restaurants and businesses in August filed a suit against the mayor’s proof of vaccination policy rule for city eateries, gyms, movie theaters and other indoor establishments.

The court actions have resulted in some delays, but so far have not proved successful.

“We are confident, because it’s universal,” he said on the morning cable show. “I don’t know all the intricacies of what the Biden administration has been through, but I do know this: our health commissioner has put a series of mandates in place. They have won in court, state court, federal court, every single time, and it’s because they’re universal and consistent, and they’re about protecting the public right now from a clear and present danger.”