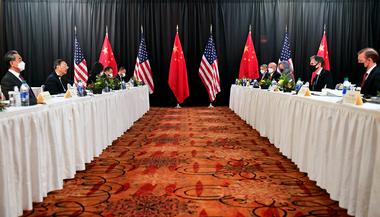 China will press US officials to back off many of former President Donald Trump’s policies, while Washington will try to convince Beijing to use its “tremendous influence” on North Korea to denuclearize during a high-profile meeting in Alaska later Thursday, according to reports.

The meeting is the first face-to-face sit down of top Chinese and US officials since President Biden took office in January and allows Washington and Beijing to reset the rocky relationship between the world’s two biggest economies.

Each side is entering the talks with their own agendas.

The Chinese delegation will pursue a slew of initiatives with the Biden team, including dropping restrictions against Chinese communication giant Huawei Technologies and chip maker Semiconductor Manufacturing International Corp.

They will also try to get the US team to relax visa limits on members of the Communist Party, as well as Chinese students and journalists with state-media outlets, the newspaper reported.

If the US agrees, China is expected to relax countermeasures Beijing approved in retaliation.

The Chinese team will also suggest scheduling high-level meetings with officials and hammering out a virtual summit between Biden and Chinese President Xi Jinping, the report said.

Biden has said he has no plans to abandon Trump’s hard-line policies against Beijing, especially the tariffs against Chinese goods distributed in the US.

Blinken also endorsed Trump’s “tougher approach to China” and said it could be helpful to Biden’s foreign policy.

The US’ top diplomat, who with Defense Secretary Lloyd Austin met over the last few days with allies in Japan and South Korea, said China can play a “critical role” in convincing North Korea to abandon its nuclear weapons.

“China has a unique relationship with North Korea. Virtually all of North Korea’s economic relationships, its trade, are with or go through China, so it has tremendous influence. And I think it has a shared interest in making sure that we do something about North Korea’s nuclear program and about the increasingly dangerous ballistic missile program,” Blinken said during a news conference Wednesday in Seoul.

​”​So I would hope that whatever happens going forward, China will use that influence effectively to work on moving North Korea to denuclearization,” he continued.​​

North Korea’s vice foreign minister Choe Son Hui confirmed that the Biden administration had reached out to the regime about the country’s nuclear program.

But Choe called the US attempt a “time-delaying trick” and said North Korea will continue to reject such offers until Washington ends its aggression toward the country.

“What has been heard from the U.S. since the emergence of the new regime is only a lunatic theory of ‘threat from North Korea’ and groundless rhetoric about ‘complete denuclearization,’” ​Choe said.​

Despite the high-expectations for the meeting, a senior Biden administration official downplayed the possibility that the Alaska talks would result in any firm agreements, characterizing it as a “resumption of a particular dialogue mechanism or the beginning of a dialogue process​.”