UPDATE: MOM’s Fighting Back!! ‘We are NOT Domestic Terrorists.’ ‘We are Moms Protecting Our Children by Protecting What They Learn 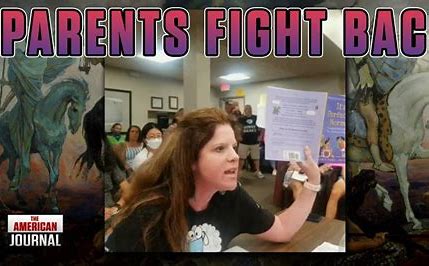 At the same time, in the State of Virginia, which seems to have become the epicenter of this ‘War against the Lefts attempt to indoctrinate the Children of America, the infamous Andrea Weiskoppf, spokesperson for the maniac left, has been a leading ‘whiner’ to the Biden administration and major advocate to the Department of Justice to label ‘Concerned Parents’ Domestic Terroristsi for fighting against the teaching of CRT and other perverted ideas to children in the Public School System.

Andrea Weiskopf, a Loudoun middle school English and Latin teacher, has been a fixture at such events throughout the county, advocating progressive causes, for years. She began several years ago when the School Board started discussing protections for the LGBTQ community.

“I’m brave, I’m not stupid,” Weiskopf once assured security guards at a conservative event. Weiskopf isn’t shy about crowds, although she does avoid confrontation. She sat out the June 22 School Board meeting, where hundreds of people showed up to chastise the School Board for planning to implement protections for transgender students. Ultimately, a chaotic boardroom crowd was cleared out by deputies.

58 thoughts on “UPDATE: MOM’s Fighting Back!! ‘We are NOT Domestic Terrorists.’ ‘We are Moms Protecting Our Children by Protecting What They Learn”