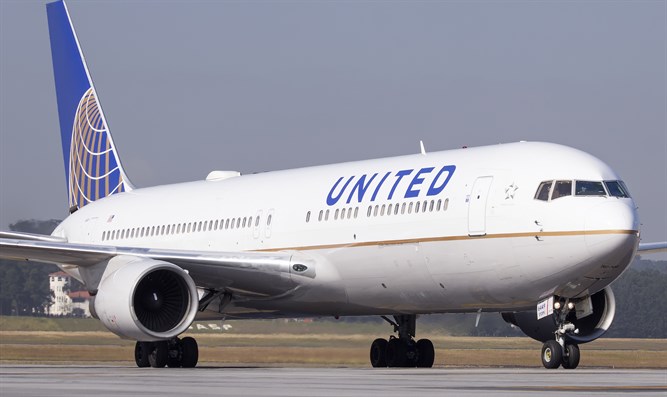 Hundreds of passengers stranded as United cites policies of Israeli government for decision to cancel all flights.

United Airlines announced Monday that it was cancelling all flights to Israel, stranding hundreds of passengers who were scheduled to arrive in Israel in the coming days.

In a statement to customers, United apologized for the inconvenience and cited the policies of the Israeli government for the move.

The Times of Israel is reporting what seems to somewhat of a political skirmish over the cancellation by Israel of some flights from Spain.

Two more European airlines canceled flights to Israel on Friday amid fears of the novel coronavirus and stringent government directives aimed at containing an outbreak, after several airlines cut back on services to Israel earlier in the week.

Alitalia said that it had decided to reduce flights to Israel, and from March 11 until March 28, all flights would be canceled.

Iberia, which runs seven weekly flights between Madrid and Israel, said it would halt all flights to Tel Aviv until the end of the month.

“Due to Israeli Interior Ministry directives banning citizens from a number of countries, including Spain, we are forced to temporarily suspend flights to Tel Aviv,” Iberia said in a statement.

The cancellations come as authorities reported two more tourists who may have brought the virus to Israel.

The Health Ministry said Friday that a French tourist who visited Israel this week was diagnosed with the virus after returning home. He arrived in Israel on Sunday on Transavia flight 3930, landing at 12:30 p.m., and left on Monday on the same airline, flight 3933, which took off at 1 p.m.

The tourist visited family in Jerusalem, arriving in the city by train from Ben Gurion International airport. He attended a family event at a Jerusalem synagogue on Sunday night and visited a cafe on Monday before taking the train back to the airport, the Ynet news site reported.

The Italian tourist stayed in the Dan Hotel in Tel Aviv, where he spent most of his time and ate most meals. He also visited Haarba’a Street in the city.

Health officials called for anyone who was on the same flights to enter quarantine immediately and contact the Health Ministry.

The cancellations by Iberia and Alitalia followed disruptions to several other airlines.

On Thursday, German airline giant Luthansa said it was canceling all flights to Israel until March 28.

“The Lufthansa group sees itself forced to make this cancellation for economic and operational reasons, as many passengers are no longer entitled to enter the country,” the group said in a statement.

Flights to Tel Aviv and Eilat by Lufthansa and subsidiaries Swiss and Austrian Airlines will be canceled from Sunday, March 8, until the end of the winter timetable on March 28.

Hungarian low cost airline Wizz Air, the most active foreign airline operating out of Ben Gurion airport, said Sunday it was cutting back on its flights between Israel and Europe due to low demand.

El Al on Friday canceled some flights to San Francisco and a number of European cities, with a senior company official calling the virus outbreak “an unprecedented crisis.”

The airline axed hundreds of employees and slashed salaries this week as it grapples with ongoing financial losses caused by the virus outbreak. The company appears to be one of the hardest hit in Israel by the virus, and is expecting revenue losses of over $70 million.

The International Air Transport Association (IATA) warned Thursday the total revenue impact on the industry could be in the range of $63-$100 billion.

Israel has thus far taken far-reaching measures to curb the spread of coronavirus, forcing thousands of Israelis into self-quarantine, barring foreigners from countries hit hard by the virus, banning large gatherings, and advising against personal contact and travel abroad.

It was the first country to urge its citizens to refrain from international travel entirely because of the outbreak.

Israel on Wednesday barred entry to almost all non-residents of the Jewish state arriving from France, Germany, Spain, Austria and Switzerland.

Earlier that day, it had already ordered citizens and Israeli residents from the same countries into quarantine.

On Friday reports said Israel was considering barring entry to US citizens, and forcing Israelis returning from the US into quarantine. Foreigners from the UK and the Netherlands are expected to be denied entry next week.

Between 50,000 and 80,000 Israelis are under self-quarantine and large events such as concerts and sporting matches have been canceled due to directives issued by the Health Ministry.

The Israel Police announced Thursday that it had begun a crackdown on citizens who are violating its far-reaching restrictions.

Israel has confirmed 21 infections and no deaths, but one patient is in serious condition. 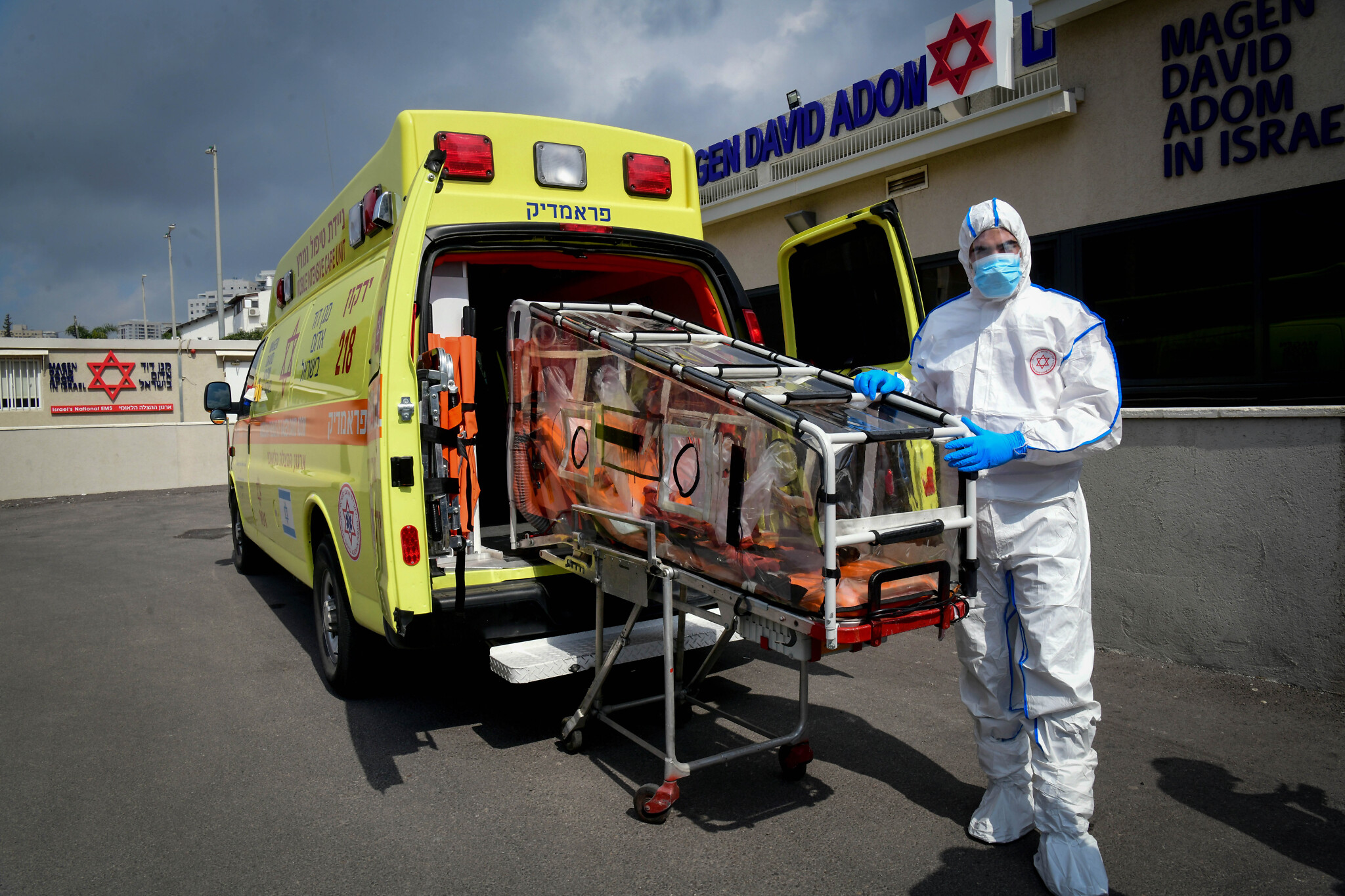 A Magen David Adom ambulance service worker wears protective clothing as a preventive measure against the coronavirus seen outside the special emergency call center in Kiryat Ono on February 26, 2020. (Flash90)

The man, a bus driver from East Jerusalem who was diagnosed with the virus on Thursday, required artificial ventilation, according to Baruch Padeh Medical Center in Tiberias.

The patient drove a tour bus for a group of Greek pilgrims visiting Israel, the West Bank and Egypt before returning home. Twenty-three of the tourists have since been diagnosed with the coronavirus.

The Palestinian Authority said Thursday that seven people at a hotel in the Bethlehem area were suspected of having been infected with the coronavirus by the Greek tourists.

The Palestinian Authority declared an unprecedented state of emergency in the West Bank, shutting schools, banning tourists and placing restrictions on gatherings and movement between cities.

Israel, which controls the West Bank, placed Bethlehem on lockdown, banning Israelis and Palestinians from entering or leaving the storied city, as officials from both governments race to contain the virus’s spread in Palestinian population centers.