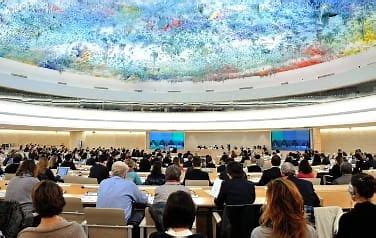 The Hypocrisy of these Countries, Bahrain, China, Russia, Cuba, Libya, Uzbekistan, Somalia, Pakistan and Venezuela, who sit on this council would be laughable if it weren’t so tragic—voted in favor of the resolution along with other countries with poor human-rights records. 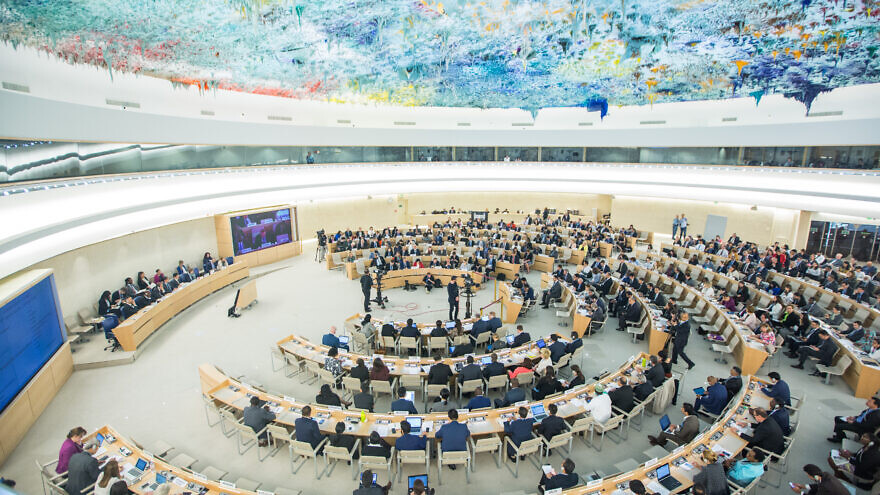 A view of the U.N. Human Rights Council special session on “the deteriorating human-rights situation in the occupied Palestinian territory, including East Jerusalem,” May 2018. Photo by Elma Okic/U.N.

(May 27, 2021 / JNS) The United Nations Human Rights Council (UNHRC) approved a measure on Thursday to permanently investigate Israel for war crimes, while also calling for an embargo against it.

The 47-member body passed the measure 24-9, with 14 members abstaining. The countries that opposed the resolution were Austria, Bulgaria, Cameroon, Czech Republic, Germany, Malawi, Marshal Islands, the United Kingdom and Uruguay.

Bahrain, which established ties with Israel last year, voted in favor of the resolution, along with other countries with poor human-rights records, such as China, Russia, Cuba, Libya, Uzbekistan, Somalia, Pakistan and Venezuela.

In her opening statement to the council, U.N. High Commissioner for Human Rights Michelle Bachelet said that Israel’s airstrikes on Gaza may constitute war crimes.

“If found disproportionate, such attacks might constitute war crimes,” she said. She also urged Hamas to refrain from firing rockets at Israel, calling the action a “clear violation of international humanitarian law” but stopped short of calling it a war crime as well.

Israeli Prime Minister Benjamin Netanyahu called it a “shameful decision, and that the council had shown a “blatant anti-Israel obsession.”

Israeli Ambassador to the United Nations and the United States Gilad Erdan called the resolution “outrageous.”

“This appalling, one-sided anti-Semitic resolution has effectively predetermined the results of the so-called investigation. It ignores the rockets fired at Israeli civilians and equates Israel with Hamas, a terrorist organization, thereby legitimizing Hamas and other terrorist organizations worldwide.”

Erdan added that the resolution is further evidence of the UNHRC’s “obsession” with Israel.

“Since its establishment, the UNHRC has proven that it is morally corrupt. It has held 30 special sessions—nine of which were solely focused on Israel—with no resolutions against human-rights violators such as Syria and Iran,” he stated.

Going on to thank the countries that opposed the resolution, Erdan said that “anyone who cares about human rights, including the rights of the Palestinians in Gaza, must stop equating Israel with Hamas and focus on the atrocities Hamas inflicts on Israelis and Palestinians alike.”

The U.S., which is not currently a member of the council, called the resolution “a distraction that adds nothing to ongoing diplomatic and humanitarian efforts” and instead it  “threatens to imperil the progress that has been made.”

(Notice, that the U.S. could not think of any other way to describe this resolution only that it is a “distraction” to diplomatic efforts. ED)