Turkey prepares to clash with Israel, Greece and EU over East Med 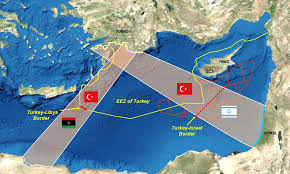 Turkey’s goal is to break up Israel’s relations. It has also sought to entice Egypt with claims of reconciliation in the last month.

Turkey has sent a diplomatic note to Greece and Israel claiming that it must seek “its permission before assuming work on a proposed undersea power cable in eastern Mediterranean waters,” according to reports which emerged in Turkey on Monday night. This comes days after Israel ended a naval drill with Cyprus, Greece and France.

Turkey signed a deal with the embattled government in Tripoli in 2019 and has been threatening Greece and Cyprus claims at sea over the last year. In April 2020 and December 2020 Turkey claimed it wanted to reconcile with Israel, seeking to entice Israel away from an emerging partnership with Greece. Turkey’s pro-government media even sought to send maps to Israel, claiming it could sign a maritime deal with Israel that would wipe Cyprus’ claims off the map. Instead, Israel and Cyprus have amicable ties and a maritime boundary that they agree on.

Israel is getting new Sa’ar 6 ships to defend its EEZ at sea and its gas platforms. In addition, Israel signed a deal with Greece and Cyprus for an East Med pipeline last summer and is part of a gas forum with Greece, Cyprus, Egypt and other states.  Turkey’s goal is to break up Israel’s relations. It has also sought to entice Egypt with claims of reconciliation in the last month. Egypt has said Turkey must make changes to get back into normalization.

Turkey hosts Hamas and other terrorists and threatens Egypt and Israel.   “In a diplomatic note sent to the two countries’ embassies and the EU delegation on Monday, Ankara said the three must seek its permission before conducting any work on Turkey’s continental shelf, according to diplomatic sources,” Turkey’s media says. Turkey is angry that Cyprus, Israel and Greece “last week signed an initial agreement on laying the world’s longest undersea power cable linking their electricity grids.” Turkey’s latest claim is that the 1,200-kilometre (745-mile) EuroAsia Interconnector’s projected plans show it passing through Turkey’s continental shelf, Turkish media reports.

Turkey wants to use this threat hanging over claims regarding the cable to blackmail Israel, it appears. To show how it will use this, the government in Turkey gave its marching orders to state media and pro-government media. Turkey has arrested, jailed or forced into exile all critical journalists so its media reflects the government stance. Daily Sabah, TRT and Anadolu rushed to print the government claims about the continental shelf and the “note” Turkey is sending.

Turkey’s new note shows its real face compared to the claims of reconciliation last year. Turkey has also slammed Kosovo for opening relations with Israel and Turkey has tried to sabotage the new Abraham Accords with the UAE and Bahrain. Turkey is also angry that Sudan and Israel are now making peace. These are setbacks for Ankara which backs Hamas and has tried to isolate Israel over the last decade.  Turkey and Israel once had good relations, twenty years ago. Since then however, Recep Tayyip Erdogan came to power and become increasingly authoritarian and Turkey has become a leading opponent of Israel. It even compared Israel to Nazi Germany in comments at the UN in 2019. Now, Turkey finds itself isolated in the region. Its only friends are Qatar, Hamas and the weak Libyan government, as well as some extremists in northern Syria known more for ethnic cleansing and working as mercenaries for Ankara than accomplishing much.

Ankara wants to put on a new face, speaking with Russia and Qatar about Syria recently and also having its leader Erdogan pen an op-ed in Bloomberg. However, it has managed to alienate France and many other countries. The US may work with Turkey on hosting a Taliban peace conference. Turkey appears to prefer Russia and Iran to working with the West and US.

Even NATO appears to now be concerned about Turkey’s crackdown on democracy and its drift toward Russia and China.  By setting up a challenge to Greece and Israel, Turkey may be preparing the way for increased tensions down the road with Cyprus and Egypt and France. These countries, along with the UAE and Saudi Arabia appear to have increased shared interests.

In addition the US and India, as well as other Quad countries want to work closer with France, and France and India both want to work with the UAE.This means an underwater cable or gas pipeline may be symbolic of larger changing dynamics. Ankara, for instance, is nonplussed that Saudi Arabia is also working with Greece.