This is an Absolute ‘Chilul Ha’Shem:’ 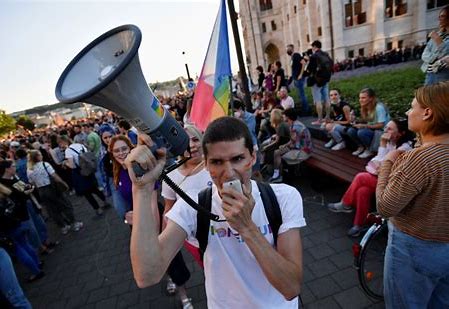 (JTA) — Jewish groups in Hungary have condemned a new law in the country that forbids sharing content on homosexuality with minors.

Called the “gay propaganda law,” the legislation passed last week in parliament follows similar moves in Russia in 2013 that define written or visual materials pertaining to sex reassignment or homosexuality as propaganda that should not be allowed to reach children.

The measure, which President Janos Ader signed Wednesday, has triggered a diplomatic spat between Hungary and other member states of the European Union.

The Golem Theater, a Budapest-based institution that deals extensively with Jewish subjects and has many Jewish members, said on Facebook that it “stands against the propaganda law.”

Mazsihisz, the largest federation of Jewish communities in Hungary, also criticized the legislation without naming it in the group’s statement. Mazsihisz defines itself as a religious community.

“The Mazsihisz, as a Jewish group, firmly believes that all people are inherently pure and their emotions do not make them unclean,” the statement read. “No one should be labeled impure, be discriminated against and certainly not outlawed simply because of their orientation or identity. Such classifications destroy social cohesion and our sense of belonging.”

Hungary’s right-wing government under Viktor Orban has clashed on several issues with Mazsihisz, which has warned that the government’s campaign criticizing Jewish billionaire philanthropist George Soros risks encouraging antisemitism, and that the government is facilitating Holocaust revisionism. Other local Jewish groups, including the EMIH Jewish federation, have disputed these allegations.

One thought on “This is an Absolute ‘Chilul Ha’Shem:’”