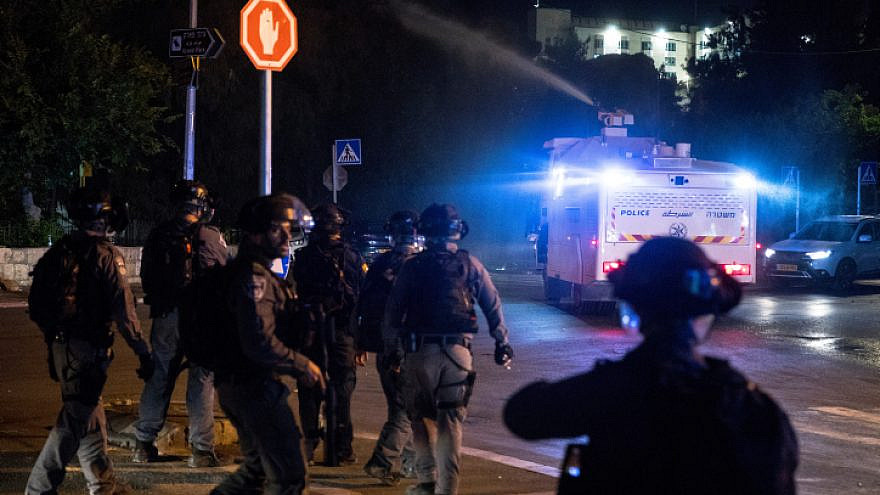 Arab protesters hurled stones and firebombs at Jewish homes in the flashpoint Jerusalem neighborhood • Four suspects have been arrested in connection with the incident. Israeli security forces clash with protesters outside a home of a Jewish family during a protest against the pending eviction of Arab residents from homes in Jerusalem’s Sheikh Jarrah neighborhood, May 8, 2021. Photo by Olivier Fitoussi/Flash90.Spread the word.
Help JNS grow! Share now:

(June 22, 2021 / JNS) The Israel Police on Tuesday announced the arrest of four suspects in connection with violent clashes the night before in Jerusalem’s Sheikh Jarrah neighborhood. Arab rioters hurled stones and firebombs at Jewish homes in the neighborhood, injuring a pregnant woman, and launched fireworks at police, Ynet reported.

The Palestinian Red Crescent reported that 20 of the rioters were wounded when police moved in to disperse the crowd. Jewish residents of the neighborhood told Ynet that the Jewish woman was hit by a stone. There was no information available as to her condition.

“There has been a war here for two hours,” said Guy Assulin, a father of 10 who has lived in the area for 12 years. “War. Stones, blocks, fireworks, firebombs. Madness. It’s never been this way,” he added.

The current wave of clashes in the neighborhood focuses on Othman Ben Affan Street, where several Jewish families reside alongside Arab families facing eviction, according to Ynet.

However, the violent disturbances in the neighborhood first broke out in May, ahead of an expected ruling by the Supreme Court on an appeal against the evictions. The Sheikh Jarrah case became an international cause célèbre, with politicians and celebrities expressing their opposition. When Hamas launched its May 10 attack on Jerusalem, leading to an 11-day conflict with Israel, it claimed that it was doing so in part due to the Sheikh Jarrah case.

The court postponed the ruling due to the eruption violence.