The Only Trump Foreign Policy Biden Wants to Keep 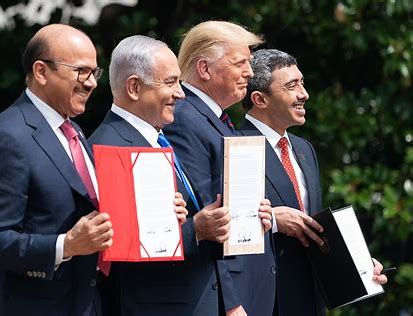 Joe Biden disagrees with most of President Trump’s foreign policy initiatives, but several of his advisers tell Axios that there is one he plans to keep: the Abraham Accords.

Why it matters: Continuing to push the Abraham Accords — the biblical branding the administration has given to the individual normalization agreements between Israel and Bahrain and the United Arab Emirates — could help Biden build positive relationships with Israeli Prime Minister Benjamin Netanyahu and other leaders in the Persian Gulf.

The endgame: Biden could use additional deals to induce Netanyahu to take steps toward preserving the option of a two-state solution — the way Trump got Bibi to kill the annexation of the West Bank in return for his agreement with the UAE.

The Obama administration had said Arab states would only make peace with Israel as a group, and only after it reached an agreement with the Palestinians.

The president-elect has vowed to reverse many of Trump’s controversial orders, like pulling the U.S. out of the Paris climate agreement, on his first day in office. He also has pledged closer relationships with NATO and other allies.

Netanyahu had a notoriously rocky relationship with the Obama administration, but Shaprio says Biden would leverage the accords differently than Trump: “He wants to use that dynamic to reflect some positive momentum back into the Israeli-Palestinian deal.”

Driving the news: Saudi Arabia is one Arab nation that has not normalized relations with Israel — despite Jared Kushner’s last-ditch effort to broker a deal when he visited the region last week. The Saudis are waiting for Biden to assume office before making such a decision.

The backdrop: After the Israel-UAE normalization agreement was announced in August, Biden welcomed it and called it “a historic step.”

The big picture: Getting the U.S. back into the Iran nuclear deal is the main foreign policy objective of the incoming Biden administration in the Middle East.