The Most Horrifying News You Have Ever Read About YOUR OWN GOVERNMENT, Broke this Weekend in the (Left Wing—of all places)L.A. TIMES 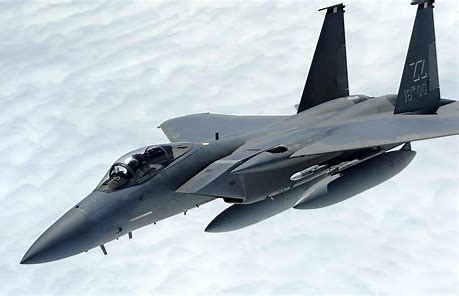 In March of last year, California National Guard members awaited orders from Sacramento headquarters to make preparations for any civil unrest that might arise from the outbreak of the coronavirus.

The members expected directives to ready ground troops to help state and local authorities respond to disturbances triggered by resistance to stay-at-home rules or panic over empty store shelves.

But then came an unusual order: The air branch of the Guard was told to place an F-15C fighter jet on an alert status for a possible domestic mission, according to four Guard sources with direct knowledge of the matter.

Those sources said the order didn’t spell out the mission but, given the aircraft’s limitations, they understood it to mean the plane could be deployed to terrify and disperse protesters by flying low over them at window-rattling speeds, with its afterburners streaming columns of flames. Fighter jets have been used occasionally in that manner in combat zones in Iraq and Afghanistan, they said.

Deploying an F-15C, an air-to-air combat jet based at the Guard’s 144th Fighter Wing in Fresno, to frighten demonstrators in this country would have been an inappropriate use of the military against U.S. civilians, the sources said.

They said the jet was also placed on an alert status — fueled and ready for takeoff — for possible responses to protests over the murder of George Floyd by a police officer and to any unrest sparked by the Nov. 3 presidential election.

“It would have been a completely illegal order that disgraced the military,” one source said. “It could look like we’re threatening civilians.”

“That’s something that would happen in the Soviet Union,” said a second of The Times’ sources, who spoke on condition of anonymity because they feared retaliation from their superiors. “Our military is used to combat foreign aggressors.”

The sources said the directives from Guard headquarters made their way down orally or in text messages, rather than in formal written orders, which was unusual and heightened their concerns that the jet would be used inappropriately.

Maj. Gen. David Baldwin, who leads the California Guard, did not respond directly to interview requests for this story. A spokesman for Baldwin, Lt. Col. Jonathan Shiroma, denied that the F-15C was placed on an alert status for a potential response to civil disturbances.

“We do not use our planes to frighten or intimidate civilians,” Shiroma wrote in reply to emailed questions from The Times.

Shiroma also said that assigning jets at the 144th Wing to respond to civil unrest would have required the approval of First Air Force, which oversees the air defense of the continental United States for the North American Aerospace Defense Command (NORAD). He said the California Guard “never made such a request.”

He released a list of aircraft that he said were “postured to support any potential civil unrest missions” leading up to the election; it included two planes — a C-130J and an HC-130J — but no fighters.

“No F-15s were contemplated,” Shiroma wrote.

But The Times reviewed other internal Guard documents that show the jet was placed on an alert status for a possible election-week mission and that officers discussed concerns in March 2020 as well as that summer about using the F-15C for domestic purposes, including to intimidate civilians.

The week before the election, a lieutenant colonel sent a message to Guard members who maintain the F-15C, advising them that a jet must be “ready to take off within two hours,” beginning the Monday morning before the election. That meant a pilot and launch crew had to be available to reach the Fresno base within 90 minutes or so of receiving an order to deploy the jet, the sources said.

With concern mounting among Guard officers and others, the then-commander of the 144th Wing, Col. Jeremiah Cruz, sent an email to several officers, saying that “there is no expectation that the F-15C will be used in any way in support of civil unrest.” He went on to instruct the recipients to keep him apprised of “any requests or upcoming requests” from California Guard headquarters in Sacramento.

While that order never came, the sources said, the fact that their leaders might even consider using the F-15C over civilian crowds alarmed Guard members.

“It’s a war machine, not something you use for [suppressing] civil unrest,” a third source told The Times. He said readying the F-15C for potential deployment over a protest was “definitely unprecedented” in his experience.

Cruz did not respond to interview requests.

The F-15C can hit supersonic speeds, fires air-to-air missiles and is outfitted with a 20-millimeter cannon. It is expensive to operate, costing nearly $25,000 per flight hour, according to the Guard.

At Fresno, the jets are used to train pilots for combat, and a few are kept on around-the-clock alert to respond immediately to attacks by enemy aircraft on orders from the Pentagon as part of NORAD. That federal alert mission is separate from any use of the jets for civilian purposes.

“That jet has one mission and one mission alone — to go up and shoot down other airplanes,” said retired Gen. David Bakos.

The Defense Department and First Air Force were not involved in any decision to place the F-15C on an alert status for civilian disturbances, military spokespersons said. Army Lt. Col. Christian Mitchell, a Pentagon spokesman, said deploying the jet “for dispersing crowds would not be an appropriate use of the F-15.”

As the head of the California Guard, Baldwin reports to Gov. Gavin Newsom. A spokeswoman said that Newsom never authorized the use of the F-15C for a response to civil unrest, and that the possibility of that type of mission for the jet “was never a consideration before the governor’s office.” If it had been, the spokeswoman added, Newsom “would not have approved it.”

This isn’t the first time questions have been raised about the Guard’s use of aircraft in times of civil unrest. In October, The Times reported that the Guard had sent an RC-26B reconnaissance plane to monitor Floyd-related protests in June in the affluent Sacramento suburb of El Dorado Hills, where Baldwin lived.

Other states’ Guard units deployed RC-26B planes to fly over protests in Minneapolis, Phoenix and Washington, D.C. Unlike the small and peaceful protests in El Dorado Hills, however, the demonstrations in those cities were large and sometimes involved property destruction and street clashes.

Members of Congress voiced concerns that the planes were used inappropriately to surveil civilians. A resulting investigation by the Air Force inspector general’s office concluded in August that the RC-26Bs did not violate rules barring the military from collecting intelligence on U.S. citizens, and said the aircraft wasn’t capable of capturing “distinguishing personal features of individuals.”

Baldwin told The Times last fall that he didn’t recall whether he had approved the deployment of the RC-26B to El Dorado Hills. He said the fact that he lived there had “nothing to do with” the mission.

A Newsom spokesman said later that the deployment of the surveillance craft “should not have happened. It was an operational decision made without the approval — let alone awareness — of the governor.”

In the case of the F-15C, the sources said Guard officers told crews during the coronavirus lockdown to have the jet fully fueled and assigned a pilot around the clock. Who in the Guard chain of command would have had the authority to order the jet dispatched on a civilian mission was not clear in the directives, the sources said. They added that the jet designated for the task was not armed with missiles and its cannon was not loaded.

In addition to the preelection message, The Times reviewed two written communications circulated among Guard members that referred to the order to ready the jet for a domestic mission known as Defense Support of Civil Authorities. That category of mission includes the deployment of troops and equipment for nonmilitary emergencies, such as earthquakes and hurricanes, as well as to help police agencies respond to violent protests.

The first communication, circulated shortly after the COVID-19 outbreak, posed the question of whether the Guard was preparing to use the F-15C as a “show of force,” which the sources said was a reference to flying it low over crowds.

A second communication in July contained a discussion of using the F-15C to survey infrastructure damage, but it also refers to the possibility of the jet being used as a “show of presences.” The sources said that phrase also refers to using aircraft to intimidate people on the ground.

In his statement to The Times, Shiroma said the F-15C has been used in the past to survey earthquake damage because it can reach remote locations faster than other aircraft.

Retired and active officers who spoke to The Times said it would make no sense to place an F-15C on a 24-hour alert to respond to earthquakes or other natural disasters. That task, they said, is far better suited to the Guard’s helicopters and surveillance aircraft, which are cheaper to operate.

Dan Woodside, a retired Guard pilot who has flown the F-15C, said that on the few occasions the fighter jet was deployed to assess earthquake damage, it proved nearly useless because it isn’t designed for that purpose. The jet has a camera-equipped targeting pod to zero in on enemy aircraft in flight, but F-15C pilots are not trained to use it for air-to-ground surveillance, Woodside said.

The sources said the targeting pod was ordered removed from the F-15C for the domestic mission after the Guard was criticized for deploying the RC-26B spy plane over El Dorado Hills.

Woodside, who held the rank of major, said he “absolutely would have disobeyed” any order to use an F-15C to buzz a civilian crowd during unrest.

“The decibel level alone from an F-15C demonstrating a show of force can break windows, set off car alarms and cause more fear than shouting ‘fire’ in a crowded theater,” he said.

If the Guard leaders were allowed to deploy the jet to help quell civil unrest, Woodside added, “you could have these warplanes buzzing all around the state of California.”

3 thoughts on “The Most Horrifying News You Have Ever Read About YOUR OWN GOVERNMENT, Broke this Weekend in the (Left Wing—of all places)L.A. TIMES”