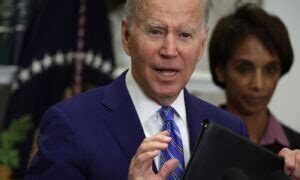 The attorneys claim that Biden and other government officials worked with big tech companies like Meta, Twitter, and YouTube to censor conversation around matters relating to everything from COVID-19 and election integrity to the Hunter Biden laptop story, doing so under the guise of combating “misinformation.”

Others named in the lawsuit include Surgeon General Vivek Murthy, Department of Homeland Security Secretary Alejandro Mayorkas, and the executive director of DHS’s newly established “Disinformation Governance Board,” Nina Jankowicz.

The Centers for Disease Control and Prevention (CDC), the National Institute of Allergy and Infectious Diseases (NIAID), Department of Health and Human Services (HHS) Secretary Xavier Becerra, and Director of the Cybersecurity and Infrastructure Security Agency Jen Easterly are also listed as defendants.

In announcing the lawsuit on Thursday, attorney Schmitt stressed the importance of freedom of speech which he said is “paramount to a healthy society and discourse, debate, and discussion” and has been “the cornerstone of our country since the Founders codified that right in the Bill of Rights.”

Schmitt stated that Americans use social media platforms to discuss an array of topics, noting that those topics have more recently, in light of the global COVID-19 pandemic, conversations regarding whether or not face coverings are effective in preventing the virus from spreading and whether the virus origins came from a lab leak in Wuhan, China.

“In direct contravention to the First Amendment and freedom of speech, the Biden Administration has been engaged in a pernicious campaign to both pressure social media giants to censor and suppress speech and work directly with those platforms to achieve that censorship in a misguided and Orwellian campaign against ‘misinformation,’” said Schmitt, referencing George Orwell’s dystopian novel about a totalitarian state, 1984.

The lawsuit filed on Thursday specifically accuses Biden and other government officials of working with big tech companies to remove “truthful information related to the lab-leak theory, the efficacy of masks, election integrity, and more,” Schmitt said.

It also accuses Biden and other officials of “falsely attacking” the Hunter Biden laptop story as “disinformation” along with tech giants like Twitter.

The story, which was first published by the New York Post in October 2020, detailed the contents of Hunter Biden’s laptop that was abandoned in a Delaware computer repair shop, and which included compromising pictures and emails regarding allegedly corrupt foreign business deals.

The New York Times and the Washington Post have since acknowledged the existence of Hunter Biden’s laptop and emails.

“Big Tech has become an extension of Biden’s Big Government, and neither are protecting the freedoms of Americans; rather, they are suppressing truth and demonizing those who think differently,” said Attorney General Landry.

“Ripped from the playbook of Stalin and his ilk, Biden has been colluding with Big Tech to censor free speech and propagandize the masses. We are fighting back to ensure the rule of law and prevent the government from unconstitutional banning, chilling, and stifling of speech.

The attorneys asked the court to declare that Biden and other defendants violated the First Amendment, exceeded their statutory authority, and to stop the officials from continuing to engage in their “unlawful” conduct.

Furthermore, they claim that the DHS and HHS officials’ conduct violates the Administrative Procedure Act.