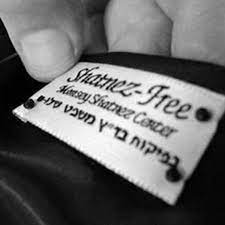 July 9, 2001- Rabbi Yehuda Shain together with R’ Yoel Schocket, Director of the International Association of Professional Shatnez Testers & Researchers (Lakewood) approached the Vishnitzer Rebbe Shlita and informed him of the problems with the Monsey Shatnez test Center. The Rebbe immediately appointed Rav Neiman, the Vishnitzer Dayan, to investigate and ascertain exactly what, if any, problems were occurring.

On July 11, 2001, Rabbi Shain together with R’ Yosef Sayagh had a meeting with Rav Neiman to present the shatnez mishaps and to decide how to proceed.

The Monsey Rabbonim (Rabbi Yisroel Hager, Rabbi Weissmandel, Rabbi Schnebalg, Rabbi Rotenberg & Rav Neiman) confronted the Monsey Shatnez Center with the facts on July 26,2001, where he confessed that he is lacking the knowledge to be able to test properly and the Rabbonim concluded that he is not qualified to test for Shatnez unless he attends extensive shatnez training sessions.

Yerushalayim and Bnei Berak Shatnez Labs gets involved- On August 12, 2001, the Monsey tester went to the “Bnei-Brak” Shatnez laboratory to obtain a certification. They interviewed him & advised him that he will require a whole year of training in their laboratory before they can consider certification. The Monsey tester informed them that he is leaving the Shatnez testing field altogether.Upon his return to Monsey, he decided to continue shatnez testing, by encouragement of some Wesley Hill, Monsey Rabbonim.

On Monday September 3, 2001, a meeting of the Rabbonim, together with the bodkim of Lakewood, Williamsburg, and Monsey took place.

The result of the meeting was that R’ Yaakov Kreitman, the Monsey tester was going to be trained by R’ Yoel Schocket from Lakewood. R’ Kreitman however refused to cooperate.

Rabbi Schnebalg- In September 2001 Rabbi Schnebalg asked R’ Schocket to send the Monsey tester a garment that contains shatnez to see if he will find it. A man’s suit with linen armhole tapes was sent. The shatnez was missed.

After Succos, 2001, Rabbi Schnebalg requested that R’ Schocket send more garments that contain shatnez, however this time Rabbi Schnebalg himself took charge of sending the garments to the Monsey tester and getting them back, to avoid any suspicion of impropriety.

The four Garments that were sent were as follows:

1] Skirt: Louis F’eraud (Croatia) labeled 78% Wool 22% Nylon (Fabric was actually shatnez, containing wool and linen). 2] Boy’s Victoro Suit (Size 6) that had a linen collar 3] Boy’s wool outer jacket Minnuetto (Canada-size 3) that had linen scraps connecting the lining to its outer shell. 4] Boy’s Shirt Mele Acerbe (Italy) of linen and cotton that also had a wool trimming around its neck and edge of front pocket and sleeves.

Rabbi Schnebalg sent them in and they all returned with Non-Shatnez tags affixed to them. He then requested that a few more garments with very obvious shatnez be sent.

He was sent five more garments;

2] Men’s black sweater: Jhane Barnes -the fabric itself was wool and linen.

By Nov 1, 2001, a total of nine shatnez garments were sent to the Monsey tester and all were certified as Non –Shatnez. All this was done under the auspices of Rabbi Schnebalg.

On November 7, 2001, Rabbis Sayagh and Schocket were asked to come to Monsey and demonstrate to the Rabbonim (Rabbi Yisroel Hager, Rabbi Weissmandel, Rabbi Schnebalg, Rabbi Neiman, Rabbi Rotenberg) the location of the shatnez in the garments certified as non –shatnez by the Monsey Test Center.

Rabbi Rotenberg recorded everything that was said by Rabbis Sayagh and Schocket, as to the location of the shatnez in every garment, and then sent the garments to Williamsburg and Boro Park for further clarification.

The Rabbonim subsequently met with the Monsey tester and asked him to resign.

A meeting was called by “Mishpat-Sholom” Bais-Din to update them of the findings of the Queens & Monsey Rabbonim as far as the Monsey tester.  The meeting took place in Williamsburg on Jan 16th ’02. Rabbi Yehuda Shain and R’ Yosef Sayagh were present, together with representatives of the Lee Ave Shatnez Laboratory, although the Monsey tester was not present. All eight Rabbonim of “Mishpat Shalom” were present, together with Rabbi Schnebalg from Monsey.  Also present was prominent Flatbush Rav Rabbi Eliezer Ginsburg Shlita and a Flatbush Askan, R’ Mordechai Gelber.

Also at the meeting was a CPA who brought some suits purchased at the store “British-American House” in Manhattan that were tested by the Lee Ave Shatnez center & labeled as Non-Shatnez. After retesting them at the Flatbush Laboratory (not affiliated with Lee Ave. Lab) they were all found to contain linen collars, obvious shatnez.

At first the Lee Ave laboratory claimed that their tester had not serviced British American House in Manhattan for the past three years. The owner of the suits immediately called the  “British-American House”.  The store manager confirmed that a tester from the Lee Ave. Lab comes once every two weeks to do Shatnez testing. The Bais-Din Mishpat Shalom had nothing to say as to explain how these garments were certified as non-Shatnez, or the confusion about services supposedly under their hashgocha.

At this point, the CPA got up and said respectfully to the Dayanim that he had taken off work to attend this meeting and since these serious issues were not being addressed he would have to excuse himself. A few of the Rabbonim also got up to leave. We concluded that it was useless to remain any longer at the meeting, since the Monsey tester was not present; representatives from the Lee Ave Laboratory were the only ones present and the serious issues were not being addressed.

In Conclusion- As of today, the Monsey Shatnez Center and [ his son in Lakewood shatnez testing] & the Lee Ave Shatnez Lab are certifying clothing containing shatnez, according to all opinions, as “non-Shatnez”, under Mishpat-Sholom’s certification.

For Example: in Dec ’06 a young man brought to the Lakewood Shatnez Testing center a wool Banana Republic Coat with a linen collar and a Shatnez-Free tag attached to it from the Monsey Test center.

Rabbi Aaron Goldminzer (New Square, New York) –Rabbi Aaron Goldminzer  (New Square, New York) came to Lakewood on July 17th’08 to meet R’ Yoel Schocket & R’ Yosef Sayagh. The meeting was held at the home of Rabbi Avrohom Spitzer the Square Dayan (Lakewood). The purpose of the meeting was to discuss if it was possible to train R’ Yaakov K. from The Monsey Shatnez Test Center. As the Monsey Test center had approached the Bais-Din of New Square and had requested a certification under their auspices i.e., a Hashgocha.

The conclusion of the meeting was that three garments that contain shatnez would be given to Rabbi Goldminzer for him to forward to R’ K..

The three garments that were given were as follows:

A] Lady’s Linen Hazel Sweater (China) – its seams were held together with wool yarns.

B] Lady’s Eileen Fisher black Jacket (China) – that its external fabric was made from wool and linen.

C] Lady’s sweater jacket that had no brand name- its external fabric contained wool and linen.

All three garments came back from The Monsey Test Center and all were certified as Non –Shatnez.

When shatnez is frequently found in the clothes, the obligation to inspect is Min Hatorah because of  “sofek d’oraisa l ’chumra” – one may not wear (or eat) something if there is a doubt whether it is permitted or forbidden.

Rabbis Offer Guidance in Response to the Manalapan Kosher Debacle