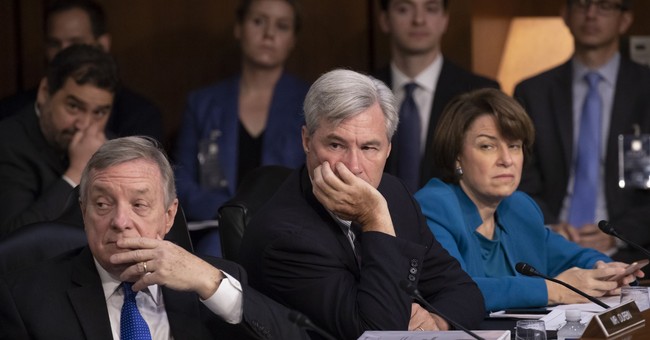 What the hell is going on up on the Hill? What the hell are Republicans thinking with this move? We have every issue playing in our favor. The Left’s culture wars are turning off swaths of voters who are flocking to the GOP. We have the start of the Biden recession. We have high gas prices, inflation, and a southern border crisis—and what do Senate Republicans decide to do?

Hold immigration reform talks with the Democrats. Do they not realize they caused the border fiasco? There are three issues that zap the energy out of the GOP base when it comes to Republican candidates. They are; abortion, gun control, and immigration. Any Republicans who are pro-abortion, pro-gun control, and pro-amnesty should consider switching parties; you’re not going to get our people to vote for you.

We have the momentum, and the Senate GOP seems content with sabotaging the 2022 midterm political environment. We all know the Democrats want amnesty for the tens of millions of illegal aliens who are here. We need to stop with the 11 million figure. It’s been the same figure since the late Barbara Jordan was in office. The true number is probably closer to 30 million, maybe more. Who knows how many there will be after Biden’s presidency? They’re purposefully not enforcing the law.

That’s the Democratic Party agenda—and the GOP thinks that this can be solved through negotiations. It’s not because there’s a resource issue, guys. It’s not because the laws are outdated. The Left doesn’t want to enforce them; they want open borders. I feel like I’m taking crazy pills. This is the worst time to be pulling off these sorts of talks. It’s also a very dangerous game. Democrats know the GOP has more to lose if these immigration negotiations collapse, which is probably their end game. Keep the GOP enticed long enough to then poison pill the whole bill and leave the GOP holding the bag with an infuriated base that will stay home in November. Guys, OPEN YOUR DAMN EYES (via Roll Call):

A bipartisan group of senators has resumed efforts to revise the U.S. immigration system, following years of failed attempts to pass legislation on the politically divisive topic.

The senators said they discussed several topics, such as changes for migrant farmworkers critical to the U.S. economy and changes for foreign workers stuck in a yearslong green card backlog, as well as for their children who grew up on legal visas but “aged out” before their parents’ green cards became available.

It was the first in what will likely be a “series of ongoing meetings,” Tillis said.

The push comes less than a year after Democrats attempted to legalize millions of undocumented immigrants through a party-line reconciliation bill but were thwarted by internal divisions and a Senate advisor’s rulings barring the inclusion of immigration provisions.

They’re going to try and legalize these people again with these talks. Now, the Left can say there’s a bipartisan interest in this or something. It’s a mess. The Democrats will try to run down the clock as much as they can, hurl provisions the GOP cannot support, and then trash the whole effort. By that time, Election Day could be weeks away. If the GOP ever signs off on a package that legalizes illegal aliens, I’m staying home. I don’t think I’m alone in that position. Again, the Democrats know this as well. Why the GOP is even entertaining this nonsense is beyond me. They have to see the obvious trap. They have to see the ulterior motives. If they don’t, then maybe you deserve to lose.