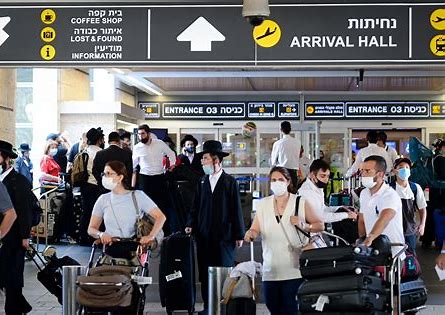 Tally is highest since February, with number of deaths and serious cases also continuing to mount; health minister says new restrictions, but not lockdown, being considered

Israel recorded over 5,000 new cases of COVID-19 on Monday, the highest tally in over half a year, as it struggled to contain the spread of the highly contagious Delta variant of the coronavirus, the Health Ministry said.

Israel last saw over 5,000 cases in a single day on February 14, when it recorded 5,190. Monday’s tally, which does not include the last two hours of the day, will likely be even higher when the full day’s count is announced Tuesday morning.

The jump in the number of cases came as the head of the Health Ministry said more restrictions were being weighed, a day after new rules went into effect aimed at limiting participation of unvaccinated individuals at certain events and venues.

Health Ministry figures showed the number of active cases up to over 34,103, including 373 people hospitalized in serious condition. Another 17 deaths on Monday brought the number of people who succumbed to the disease since the start of the pandemic to 6,559.Get The Times of Israel’s Daily Editionby email and never miss our top storiesNewsletter email addressGET ITBy signing up, you agree to the terms

Health Ministry Director-General Nachman Ash said earlier Monday that his office was concerned by the increased rate of infections and would weigh expanding restrictions, including limits on businesses, in the coming days.

“A lockdown carries the most severe repercussions,” he told Channel 13 news. “We’ve been in three and we saw the effect it had on society, the economy and health.”

“We’re weighing the possibility of implementing more limits. We want to prevent mass-attendance events and crowding as part of the new measures,” he added. “These curbs will influence the lowering of the morbidity rate.”

Ash, however, left the door open for a fourth lockdown, while calling on Israelis to get vaccinated to allow the government to avoid imposing one.

He said his office was seeking to determine the point at which a lockdown would be required. Channel 12 news reported Friday that health officials believe that will be when Israel reaches 600 to 700 serious cases. The Health Ministry director said Monday, though, that other factors are at play in the decision.

No senior official has voiced their support for a lockdown at this stage, and health officials insist that the goal is to avoid imposing it. However, some have said that it may be inevitable if case numbers continue to rise.

The US Centers for Disease Control on Monday urged travelers to avoid Israel, the West Bank and Gaza due to high infection rates.

“Because of the current situation in Israel, even fully vaccinated travelers may be at risk for getting and spreading COVID-19 variants,” the CDC said.Travelers are seen wearing face masks at Ben Gurion International Airport, on August 5, 2021. (Avshalom Sassoni/ FLASH90)

On Monday, Prime Minister Naftali Bennett instructed Public Security Minister Omer Barlev and Israel Police Commissioner Kobi Shabtai to increase enforcement against violators of coronavirus restrictions over the next eight weeks, even at the expense of other operations, in order to help prevent Israel from entering a fourth lockdown.

Under “Green Pass” rules that went into effect on Sunday, event halls, restaurants, gyms and hotels must limit entry to those who can show they have been vaccinated or have recovered, although children under 12 are temporarily exempt. The restriction does not apply to stores, malls, pools, houses of worship with fewer than 50 people in attendance, or museums, among other venues.

Members of the police force who have not been vaccinated will now have to show a negative test every 72 hours or miss work and be docked a vacation day, the Kan broadcaster reported Monday. The policy was confirmed to the station by a police spokesperson.Police enforce coronavirus restrictions in Jerusalem on August 5, 2021. (Yonatan Sindel/Flash90)

Out of Israel’s population of some 9.3 million, over 5.8 million have received at least one vaccine dose, nearly 5.4 million have gotten two, and nearly 550,000 have been administered a third booster shot.

Data released by the Health Ministry last month showed that the Pfizer-BioNTech COVID vaccine appeared to largely prevent hospitalization and serious cases, but is significantly less effective against preventing the spread of the Delta variant of the coronavirus.

Health Ministry data released Monday showed that fully vaccinated individuals made up most of the new cases and most of those hospitalized in moderate condition or worse.