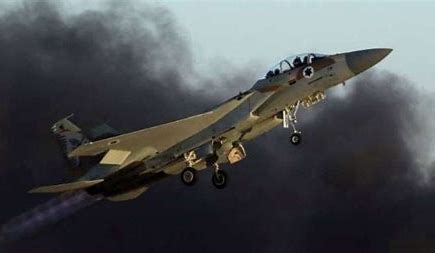 Israel launched rockets at an artillery launch site in Lebanon on Aug. 5 as a response to attacks from the Lebanese earlier this week, officials said.

The Israeli military said its fighter jets targeted the launch sites from which the Lebanese rocket attacks originated on Aug. 4. A separate infrastructure used in past terror attacks on Israeli territory was also struck in the airstrikes.

“Fighter jets struck the launch sites and infrastructure used for terror in Lebanon from which the rockets were launched,” the Israeli Defense Force (IDF) said in a statement.

The strikes reportedly hit an empty area in the Marjayoun district. There were no immediate reports of casualties.

The IDF stated that the attack serves as a warning to the state of Lebanon to prevent “further attempts to harm Israeli civilians and Israel’s sovereignty,” as Israel blames the country for the heavy artillery fire the previous day.

Multiple rockets were fired from Lebanese territory into northern Israel on Aug. 4 shortly after noon, causing warning sirens to sound in the Kiryat Shmona area. Two rockets hit open areas while the third fell short of the border.

“Three rockets were fired from Lebanon into Israeli territory,” the IDF said in a statement. “In response … artillery forces fired into Lebanese territory.”

The rockets caused several brush fires, and there has been no claim of responsibility yet for the attack, which came from an area of southern Lebanon under the sway of Iranian-backed Hezbollah guerrillas—a designated terrorist organization.

While Hezbollah’s al-Manar TV has reported on the Israeli action, the group itself has yet to issue any statement.

The border has been mostly quiet since Israel fought a 2006 war against Hezbollah terrorists. An Israeli aircraft struck Hezbollah posts in the border area last summer.

Lebanese President Michel Aoun said Israel’s airstrikes were the first targeting Lebanese villages since 2006 and showed an escalation in its “aggressive intent.”

Israel faces threats from Hezbollah along its northern border, where Hezbollah has placed about 150,000 rockets aimed at Israel, according to a 2019 U.S. State Department report (pdf).

Israeli Defense Minister Benny Gantz said while speaking to Israel’s YNet TV that the attack was “meant to send a message,” adding that the country could do much more, but doesn’t hope to arrive at that.

During the 1980s, there were more than a dozen militias in Lebanon. But after the Lebanese Civil War ended in 1990, all militia groups surrendered their arms to the government, except Hezbollah, which kept its weapons, Dr. Edy Cohen, who earned a doctorate degree at Bar-Ilan University in Israel and is an expert on the Middle East at the Begin-Sadat Center for Strategic Studies told The Epoch Times.

Hezbollah’s leaders are Lebanese, but the group has had very close ties to Iran for years. It carries out Iranian instructions, and receives financial support, intelligence, and materiel from Iran, Cohen said. Since the end of the civil war, for about 30 years, Hezbollah has treated itself as a country inside of a country, he said.

“Iran continues to provide Hezbollah with most of its funding, training, weapons, and explosives, as well as a political, diplomatic, monetary, and organizational aid,” according to the U.S. State Department report on terrorism for 2019 (pdf).