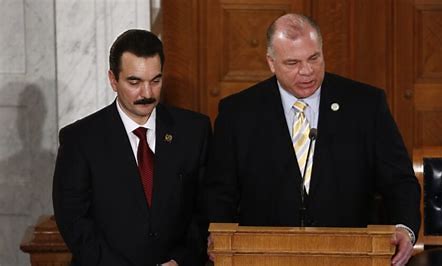 Democratic New Jersey Senate President Steve Sweeney said he will not concede the election after it was projected that he lost to a truck driver who ran a low-budget campaign, telling local media that thousands of ballots were “recently found in one county.”

“The results from Tuesday’s election continue to come in, for instance there were 12,000 ballots recently found in one county,” Sweeney told Philadelphia Inquirer and Politico late last week. “While I am currently trailing in the race, we want to make sure every vote is counted. Our voters deserve that, and we will wait for the final results.”

His office did not immediately respond to a request for comment.

The Associated Press had called Tuesday’s race in favor of Edward Durr, a Republican, for southwestern New Jersey’s 3rd legislative district. After Durr’s apparent victory, the news immediately drew international headlines because Durr only spent a few thousand dollars to potentially upend Sweeney, one of the most powerful political figures in the state and who was first elected in 2002.

Durr defeated Sweeney by about 4 percentage points, or 2,298 votes, according to AP.

Speaking to Breitbart News last week, Durr said he decided to run for Sweeney’s seat due to rights, not taxes.

“The main issue was rights,” Durr said. “People talk about how New Jersey has the highest taxes, and we’re the worst state for business, with high debt, and so on, but bottom line is rights. It’s family.”

He continued: “When somebody’s messing with your family, you’ll do anything. The governor was messing with people’s families. When you mess with somebody’s job, their livelihood, their home, their children—people just won’t take that.”

Meanwhile, Sweeney’s statement comes as Republican New Jersey gubernatorial Jack Ciattarelli’s campaign said that he will not concede to Democratic Gov. Phil Murphy. AP last week projected that Murphy would win in a narrow victory that election analysts described as unexpected and a bad omen for the Democratic Party in 2022 or even 2024.

On the morning of Nov. 4, the Ciattarelli campaign said in an email that “this race is far from over. Our team is making sure every legal vote is counted and the will of the people is heard loud and clear.” Less than one percentage point separates Murphy and Ciattarelli.

“The governor’s victory speech last night was premature,” Ciattarelli said in a video message on Twitter on Nov. 4. “No one should be declaring victory or conceding the election until every legal vote is counted.”

After “2.4 million ballots” were counted in the race, “there are still tens of thousands of vote-by-mail and provisional ballots yet to be counted,” Ciattarelli said.