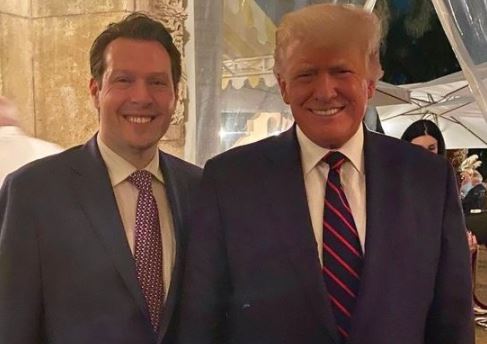 Rizzo with Trump at Mir-a-Lago on Wednesday

GOP gubernatorial gets photo at fundraiser for Missouri congressman

Republican gubernatorial candidate Phil Rizzo spoke with Donald Trump in Florida this week, his Twitter account shows, renewing speculation that the real estate developer-turned-pastor is pushing for the former president’s endorsement before the June 8 primary election.

He said he was at Mar-a-Lago on Wednesday evening and the two are photographed together in an event tent.  There is no indication that they met privately.

Rizzo appears to be at a fundraiser for Rep. Billy Long, who is mulling a bid for the open U.S. Senate seat in Missouri being vacated by retiring Republican Roy Blunt.

Another potential candidate, Rep. Jason Smith, was due at Trump’s West Palm Beach golf club for his own fundraiser on Friday.   A third candidate, former Gov. Eric Greitens, has named former Trump advisor Kimberly Guilfoyle, the girlfriend of Donald Trump, Jr., as his national campaign chair.

“Wednesday night, at Mar-a-Lago, I was reminded of what happens when the people rally behind a candidate that is up against a corrupt establishment,” Rizzo tweeted.  “New Jersey 2021 can be a redo of 2016 if….WE THE PEOPLE.”

Trump is expected to head back to New Jersey this month and will run his political operation out of the Trump National Golf Club in Bedminster.

Rizzo is a member of the Bedminster Club.

He also posted a photo with Florida Gov. Ron DeSantis taken at an event in Boca Raton on Tuesday.

The longshot challenger to presumptive GOP nominee Jack Ciattarelli has filed an appeal of a New Jersey Election Law Enforcement Commission ruling that rejected his bid for public matching funds because he missed the deadline by two days.

If Rizzo wins his challenge, it could put another $700,000 into his campaign coffers, or more if he keeps raising money.