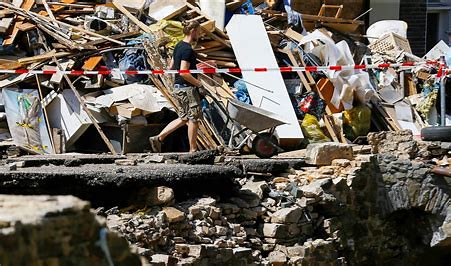 TROOZ, Belgium (AP) — Visions of cars being swept away in a raging current keep coming back to trouble Eric Mouqué. His wife, Cindy, gets triggered by the slightest noise.

So when her husband turns on the hose to clean a few things, all she can think about are those tumultuous floodwaters that ripped away homes, streets, businesses and entire neighborhoods two weeks ago in Belgium, Germany, the Netherlands and Switzerland.

The couple’s neighbor, Carine Lacroix, can’t sleep at night, remembering how her and her companion feared for their lives during the floods. Isolated and trapped in the top floor of their house, it took two days before they were rescued on a small boat by firefighters. In her nerve-wracking nightmares, she is desperately trying to keep the floods out of her home or sees one of her cats drowning before her eyes.

All three are among hundreds of survivors in the small Belgian town of Trooz who are experiencing symptoms of post-traumatic stress disorder and anxiety.

“I’ve been traumatized for life, this is not something you recover from,” Eric Mouqué, a lumberjack, told The Associated Press during a visit to the eastern town. “We will hear these noises for the rest of our lives. The sound of the water, it’s atrocious.”

Three people were killed in Trooz after the Vesdre River spilled its banks amid heavy rainfall. Overall, 38 people died across Belgium – one person was still missing Thursday, according to police – and at least 182 people lost their lives during the floods in Germany.

In Belgium, the uncontrollable flooding was one of the most violent natural disasters to hit in a century. Fast-moving waters destroyed several towns and left tons of debris in their wake.

With electricity and gas cut off and communication lines damaged, the working-class neighborhood of La Brouck and its brick-terraced houses looks like a ghost town. Since the waters receded, many people have left to find shelter with relatives or friends, but the Mouqués decided to stay.

Cleaning up the wreckage and restoring an appearance of normality remains a tall order, but hundreds of volunteers have been coming from across Belgium and abroad to help.

In the end, recovering from the psychological shock may be the more complicated task. Psychologist Etienne Vendy said the trauma induced by exposure to a natural disaster can have long-lasting effects.

“For all the people who went through hell, it will remain forever in their body and mind,” he said.

At the helm of the social aid center in Trooz, Vendy and his team have been providing psychological assistance to those seeking a benevolent ear. He said his task is to identify victims who need hospital treatment and to talk with the others as much as possible.

“I think it works pretty well, because a lot of people ask for consultations. Sometimes it’s just to talk. It’s not to do psychotherapy,” he said. “We’re really in front-line psychology. It’s about allowing people to let out their rage and their fear.”

La Brouck is among the most affected spots in the flood-stricken town of 8,600 people. According to Trooz Mayor Fabien Beltran, nearly half of the population has been hit by the disaster.

“The first emergency is rehousing, and providing people with food and cleaning products for their homes and for themselves so that they can get back to a normal life as soon as possible,” he said.

The Walloon government in charge in the French-speaking region has announced a 2 billion-euro plan for the reconstruction. To help citizens cope with urgent needs before insurance companies pay out claims, every household affected by the catastrophe can be granted interest-free loans of 2,500 euros ($2,960) to cover basic needs.

Still, that money won’t cover all the losses suffered by Alan Mereschal.

When the floodwaters burst through a side door and poured into the first floor of his house in the nearby village of Chaudfontaine, he ran up the spiral staircase to the second floor, sat on his bed, and hoped for the best.

The next morning after the deluge was over he peered downstairs. The floodwaters had receded but all of his furniture, a new television and nearly all of his belongings had disappeared.

“The water came in one door and went out the other and took everything with it,” Mereschal said. “I had a car in the driveway, that’s gone too. I have no idea where everything ended up.”

Mereschal was uncertain when asked if he would stay in his house.

“I would really like too, it depends if they let me,” he said. “If not, I will move to an apartment somewhere and believe me, it won’t be located on the first floor.”

Experts say such floods will become more frequent and severe due to climate change. But many residents in the Vesdre valley believe the human mishandling of river systems amplified the flooding. Several specialists in hydrology have suggested that lowering the water level at the Vesdre dam earlier, after forecasters had issued dire weather warnings, would have prevented a lot of damage in nearby towns.

An investigative judge was appointed this week to lead an inquiry into the flooding, which will examine whether there is evidence to charge anyone with involuntary manslaughter by failure of care or precaution.

“We want answers to understand what actually took place,” said Stevens Tagadirt, whose house in the town of Vaux-sous-Chèvremont has been badly damaged.

Tagadirt is a founding member of the group People against Flows, which is asking Belgian authorities to shed the light on the disaster.

“We want to understand how they dealt with the dams,” he said.