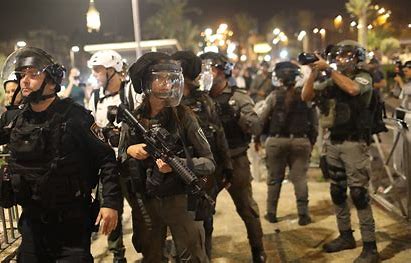 While some of the source videos come from Main Stream News sources, some of the commentary in the videos will obviously be slanted against Israel. JNEWS DOES NOT SHARE THOSE BUYIST ANTI-SEMITIC VIEWS.

The Hamas terror group claimed at one stage that it fired 137 rockets in around five minutes in a massive barrage that was an apparent attempt to overwhelm the Iron Dome missile defense system. Four people were injured in the barrage, including one critically and another in serious condition.

With a number of buildings in Ashkelon suffering direct hits over the course of the day, and concerns over the number of residential buildings in the city without bomb shelters, the Israel Defense Forces instructed residents to remain in reinforced areas.

A Religious Zionist community in central Israel was attacked by Arab rioters late Monday night, amid a wave of Arab violence across Israel. Dozens of Arab rioters mobbed the Religious Zionist ‘Garin Torani’ (core group of religious families who settle in low-income communities) of the central Israeli city of Lod over night. Rioters hurled stones and firebombs at Jewish-owned buildings, while some in the mob removed an Israeli flag and replaced it with the Palestine Liberation Organization flag. Several Jewish residents opened fire on the rioters. One rioter was killed and another wounded. The fatally wounded rioter has been identified as Moussa Hassun. The second rioter wounded in the shooting is listed in moderate condition in Sheba Medical Center in Ramat Gan.

On Tuesday, police arrested one of the Jewish residents, a 34-year-old man, who opened fire to fend off the rioters. Religious Zionist Party chief Bezalel Smotrich excoriated police over their response to the riots. “The Arab residents of Lod carried out a ‘Kristallnacht’ riot on the city’s Jewish residents last night. But the police barely responded (due to the many incidents across the country). Civilians were forced to defend themselves. Then this morning, the police arrested one of the residents, in front of his children, accusing him of nothing short of murder.”

“This is nothing less than a complete loss of moral values by the police and prosecutors. I will handle this with all my strength.” “The right to self-defense is the absolute minimum that a functioning state must give its citizens, and really the state should be doing that itself, and every rioter must know that he is risking his life.”

Arab rioters in Lod also targeted a local synagogue, torching the house of worship, and attempted to set fire to a police station.

Hamas and the Palestinian Islamic Jihad terror groups reported that several high-ranking commanders were killed in Israeli raids on Tuesday, including two top PIJ leaders in a drone strike on a building in the upscale Rimal neighborhood of Gaza City, one of whom was the brother of another top PIJ commander, Baha Abu al-Ata, who was killed in an Israeli strike in November 2019, kicking off a major round of fighting in the Strip.

IDF Chief of Staff Aviv Kohavi on Tuesday afternoon gave the military a green light to keep targeting Hamas and PIJ members operating in the Strip and bombing sites connected to the terror groups’ rocket production and storage efforts.

The IDF spokesperson said Israel was taking steps to avoid Palestinian civilian casualties, but that they were liable to occur anyway as Hamas deliberately operates within a densely populated area, using the residents of the Strip as human shields.