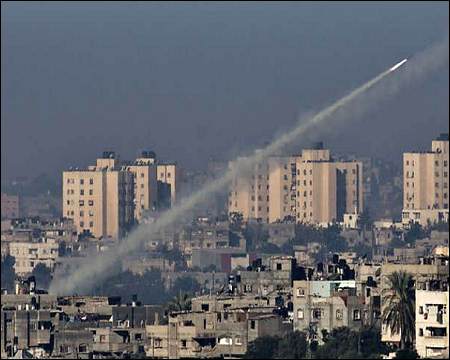 A woman was killed and dozens were injured on Tuesday evening when Palestinian terror groups in the Gaza Strip pummeled central Israel with a major rocket fusillade, in what appeared to be the largest-ever barrage aimed at the broader Tel Aviv area.

The massive attack caused Israel to briefly suspend flights at its major international airport and cancel schools Wednesday in all areas south of Herzliya.

The Hamas terror group, which rules Gaza, claimed to have launched over 130 rockets in the volley. There was no immediate statement from the Israel Defense Forces on the number of rockets fired.

In the central city of Rishon Lezion, a woman was killed from a rocket strike, bringing the number of fatalities from the rocket fire in Israel since Monday to three. She was not immediately identified.

Rockets also hit the Tel Aviv suburbs of Holon and Givatayim, injuring at least eight people, some of them seriously, police said.

One rocket fell next to a bus in Holon, injuring four people, two of them seriously and two of them moderately. Medics said a five-year-old girl was among the wounded in Holon 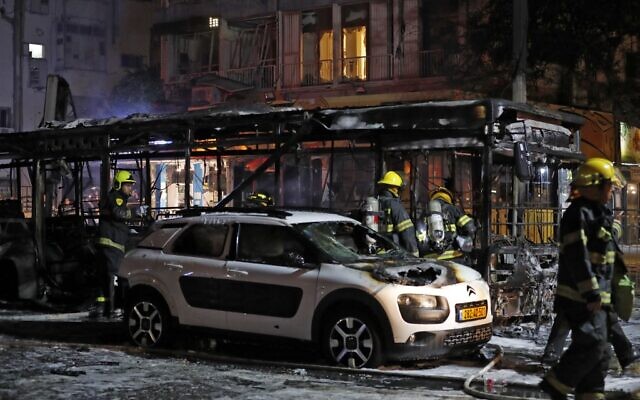 Firefighters near damaged vehicles in the city of Holon near Tel Aviv, on May 11, 2021, after rockets are launched at Israel from the Gaza Strip

In nearby Givatayim, fragments of a rocket that was intercepted by the Iron Dome missile defense system hit a house, lightly injuring four people inside, police said. A building in north Tel Aviv was also apparently hit.

The Israel Defense Forces’ Home Front Command had instructed all residents of central and southern Israel to enter bomb shelters during the attacks. The Home Front Command also ordered schools shuttered south of Herzliya Wednesday amid the rocket bombardments from Gaza.

Separately, a large tank in Ashkelon belonging to the Eilat-Ashkelon oil pipeline was hit by a rocket earlier Tuesday and has been on fire for several hours.

Firefighters have been working to douse the blaze, so far unsuccessfully.

There are fears that hazardous materials could be spread by the fire, Channel 12 reported. But the local fire chief said the fire does not pose a danger to local residents, and that firefighters expect to put it out by the morning. 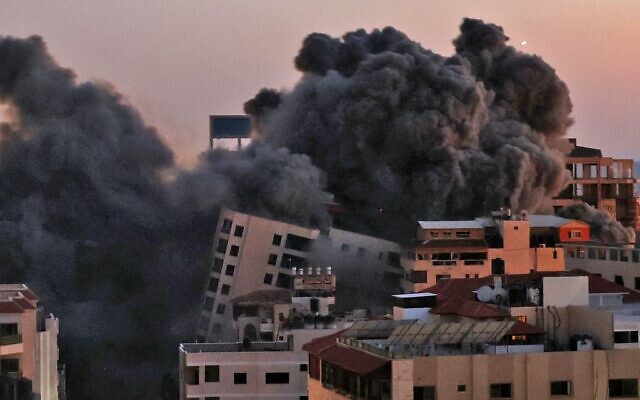 Smoke billows from an Israeli airstrike on the Hanadi compound in Gaza City, controlled by the Palestinian Hamas terror group on May 11, 2021.

Israeli jets earlier on Tuesday evening destroyed a 13-story residential building in Gaza City, in a retaliatory airstrike to the hundreds of rockets fired from Gaza since Monday afternoon.

Prior to the strike, people in the building received several warnings, including phone calls and messages, telling them to leave, and a preliminary “roof-knocking” strike — using a small missile to strike the roof with minimal damage in order to cause all inside to leave before a major raid.

In videos from the scene, the building — which housed offices of several Hamas commanders — can be seen being enveloped in dense smoke before collapsing.

It is not yet clear why Israel targeted the building. Channel 12 reported it apparently served as the home for many terror operatives, including some released by Israel during the 2011 Gilad Shalit prisoner exchange.

After the rocket strikes on central Israel, Israeli forces destroyed the al-Jawharah high-rise in Gaza City, flouting additional threats from terror groups. Hamas and Islamic Jihad had previously said that such demolitions would lead to further rocket fire on Tel Aviv.

Earlier on Tuesday, two women were killed and dozens injured, including two seriously, when Palestinian terror groups in the Gaza Strip fired massive barrages of rockets at southern Israel.

The deaths in Ashkelon marked the first fatalities in Israel in the round of fighting with Gaza terrorist groups that began Monday evening. 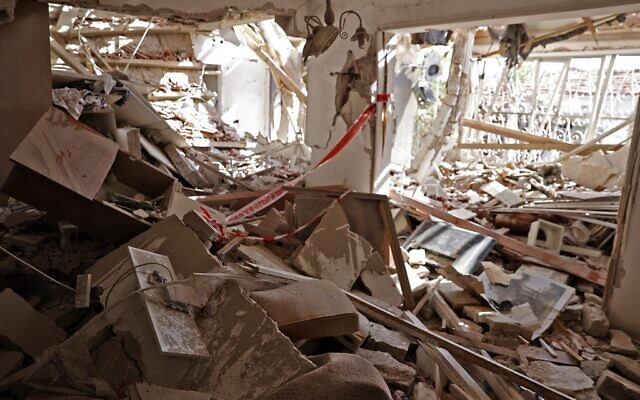 A heavily damaged house from rocket fire in the southern Israeli city of Ashkelon on May 11, 2021 (JACK GUEZ / AFP)

A technical issue with an Iron Dome battery during the massive rocket barrage toward the coastal city on Tuesday afternoon prevented some rockets from being intercepted and may have been responsible for the casualties and deaths. The malfunction was repaired and the battery returned to being fully operational shortly after, Hebrew-language media reports said.

The Barzilai Medical Center in Ashkelon on Tuesday said that it treated 95 casualties, including two seriously wounded and two in moderate condition.

Before the attack on central Israel, the army said over 630 rockets were fired at Israel from Monday evening through Tuesday afternoon, 200 of which were intercepted by Iron Dome missile defense batteries while 150 others fell short of their targets and landed inside the Strip. 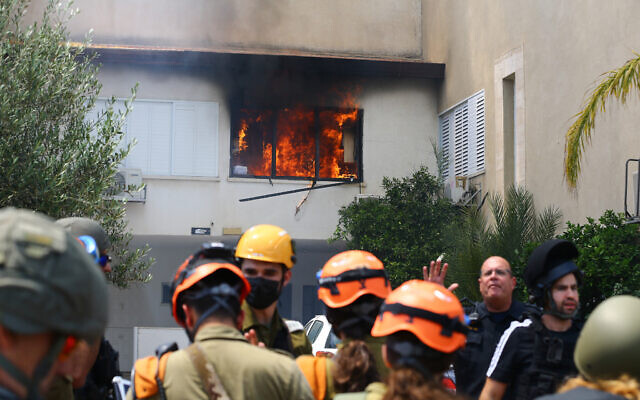 Israeli security forces at an Ashdod home hit by a rocket fired from the Gaza Strip on May 11, 2021 (Flash90)

On Monday night, a rocket directly struck a house in the Sha’ar Hanegev region, damaging it but not injuring its occupants.

In the early hours of Tuesday, a missile hit a residential building in Ashkelon, wounding six Israelis, four of them members of the same family: parents in their 40s, an 8-year-old, and an 11-year-old. The father was seriously hurt with a head wound, and the others sustained light injuries from shrapnel.

The assaults continued Tuesday night as the IDF conducted strikes on more than  500 targets in the coastal enclave, as part of what it has called “Operation Guardian of the Walls,” the military said. The previous day saw a major outbreak of violence from Gaza, including rare rocket fire on Jerusalem, where Palestinians have been clashing with police for days. 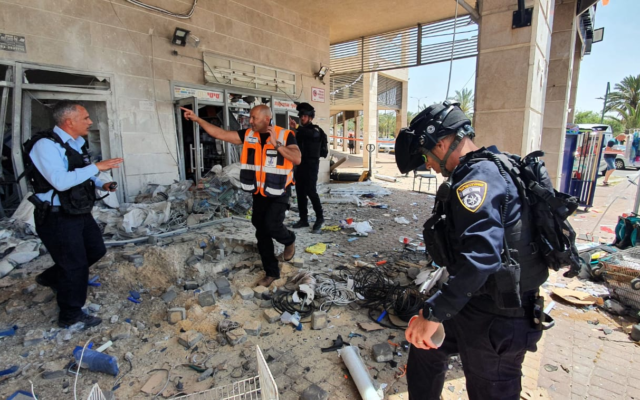 In response to the ongoing rocket rockets, IDF fighter jets, aircraft and tanks struck some 500 targets in the Gaza Strip, most of them associated with Hamas, but also some linked to other terror groups in the enclave, including the Palestinian Islamic Jihad, IDF Chief of Staff Aviv Kohavi announced Tuesday night.

Hamas and the Palestinian Islamic Jihad terror groups reported that several high-ranking commanders were killed in Israeli raids, including three top PIJ leaders in a drone strike on a building in the upscale Rimal neighborhood of Gaza City.

One of those killed was the brother of another top PIJ commander, Baha Abu al-Ata, who was killed in an Israeli strike in November 2019, kicking off a major round of fighting in the Strip. Islamic Jihad vowed revenge for the death of the three commanders in its armed wing, saying the response will be “harsh.”

Additionally, the IDF said it killed the head of Islamic Jihad’s special rocket unit, in an operation carried out in cooperation with the Shin Bet. Sameh Abed al-Mamluk was killed along with several other senior rocket officials, the army said.

According to the IDF, the military’s targets also included the home of a top Hamas commander, Hamas’s intelligence headquarters in southern Gaza, two attack tunnels that approached the border with Israel, rocket production and storage sites, observation posts, military installations and launchpads.

The IDF said it was also targeting terrorist operatives as they fired rockets or attempted to launch anti-tank missiles at Israel. On Monday, an Israeli man was lightly injured when Palestinian terrorists fired an anti-tank guided missile at his car 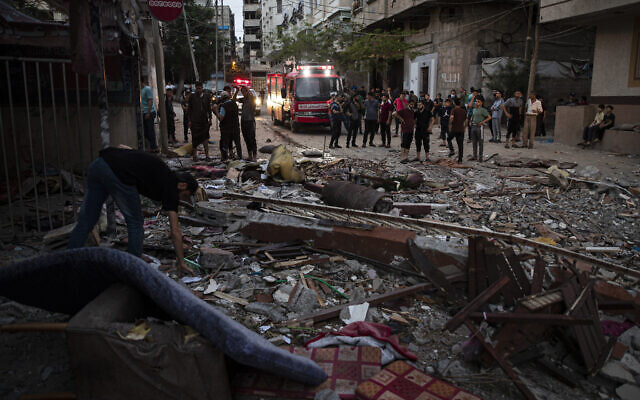 A Palestinian man inspects the rubble of a partially destroyed residential building after it was said to have been hit by Israeli retaliatory strikes on the al-Shati refugee camp in Gaza City, May. 11, 2021. (AP Photo/Khalil Hamra)

Palestinian media also reported strikes around the southern cities of Rafah and Khan Younis and on an apartment building in the al-Shati camp near Gaza city. A building was also destroyed in Gaza City’s upscale Tel al-Hawa neighborhood.

IDF Spokesperson Hidai Zilberman said a number of those killed in Gaza, including at least three children, were hit by errant rockets fired by Palestinian terrorists, not by Israeli airstrikes.

The IDF spokesperson said Israel was taking steps to avoid Palestinian civilian casualties, but that they were liable to occur anyway as Hamas deliberately operates within a densely populated area, using the residents of the Strip as human shields.

Israel on Tuesday showed no indications that it was interested in an immediate ceasefire, as Zilberman said the fighting was expected to last at least several days.

Defense Minister Benny Gantz said the IDF would continue striking Hamas and other terrorists in the Strip until “long-term and complete quiet” is restored. Gantz also threatened Hamas’s leadership, saying its commanders would “be held responsible and pay the price for the aggression.”

Hamas, which is officially dedicated to the destruction of the State of Israel, took effective control of the Gaza Strip in 2007 from the Palestinian Authority in a violent coup. Since then, Israel has imposed a naval blockade on the enclave, as well as stiff control over what can enter the Strip, maintaining that it is necessary in order to prevent terror groups from smuggling weapons into the area.

The military initially believed that Hamas was not interested in a large-scale conflict with Israel at this time, but that assessment changed over the past two days and the IDF began preparing accordingly.

Israel has fought three large operations against Hamas and other terror groups in the Gaza Strip since 2008, most recently in 2014 with a 51-day war known as Operation Protective Edge.