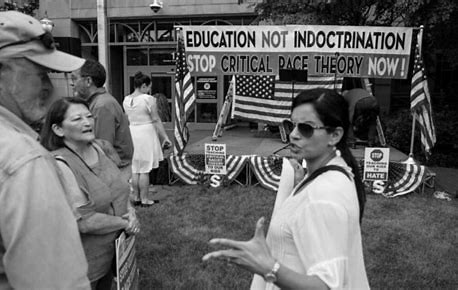 A law firm has taken legal action on behalf of Minnesotans opposed to Critical Race Theory (CRT) who argue that they have become victims of bullying and retaliation for speaking out against what they say is a divisive and discriminatory philosophy.

The Minnesota-based Upper Midwest Law Center (UMLC) on Friday announced that it had filed complaints and lawsuits on behalf of clients who “seek an end to the ‘official’ propagandizing of CRT and the bullying and retaliation which accompany it.”

CRT, a Marxist ideology that interprets society through the lens of a racial struggle and preaches the dismantling of the Family Structure, sees inherent racism in the foundations of Civil societies, which it seeks to fundamentally transform to end this claimed racial oppression and obsession with personal freedoms. An effort to incorporate CRT in American schools has been pushed by progressive politicians, activists, and major teachers’ unions, drawing backlash from parents and conservatives.

Doug Seaton, president of UMLC, said in a statement that, “our clients are bravely confronting CRT-inspired bullying, indoctrination and retaliation, which is not ‘training’ or persuasion.”

“They have been insulted, lied about, threatened, demoted and fired, simply for refusing to submit to this ideology. But the U.S. Constitution, the federal Civil Rights laws, and their Minnesota counter-parts don’t permit this race-based discrimination, retaliation, compelled speech, and invasion of privacy,” Seaton added.

Acting on behalf of its clients, UMLC has announced a series of parallel Equal Employment Opportunity Commission (EEOC) charges and state and federal lawsuits.

One of the UMLC clients, Dr. Tara Gustilo, a Filipino-American doctor who was chair of obstetrics and gynecology at Hennepin Healthcare System (HHS), was “demoted essentially because of her polite opposition to the Critical Race Theory that’s saturating her organization,” Seaton said at a press conference earlier in the week.

“I see a racist and divisive ideology of race essentialism taking over our nation and my institution,” Gustilo said at the press conference. “Further, there seems to be this growing intolerance for people with different opinions or ideas and it seems that this tribalistic ideology is fostering that kind of intolerance.”

In her EEOC complaint, Gustilo alleged that HHS “engaged in discriminatory and retaliatory behavior by demoting me on the basis of race due to my refusal, as a person of color, to subscribe to Critical Race Theory and the views of the Black Lives Matter movement and even admitting that such refusal served as the ‘trigger’ for my demotion.”

HHS did not immediately return a request for comment.

Other UMLC clients made similar allegations, with a Native-American man claiming his employer forced him to retire early due to his opposition to CRT, and parents of a Lakeville area student alleging viewpoint discrimination at their daughter’s school for refusing to allow “All Lives Matter” signs to be displayed while letting “Black Lives Matter” posters to be put up.