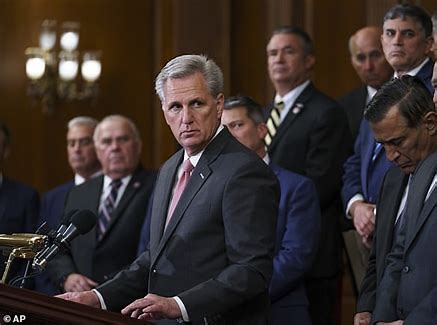 House GOP Leader Kevin McCarthy is secretly helping a handful of establishment Republican lawmakers that Donald Trump and his team are trying to take down in the primaries.

Half of the 10 Republicans who voted for Trump’s second impeachment participate in a joint fundraising committee with McCarthy and his leadership PAC.

This PAC has raised roughly $100,000 for each of the five campaigns in the first half of the year, CNN revealed.

The five Republicans are:

McCarthy’s political committee also donated $10,000 to Republican Rep. Anthony Gonzalez of Ohio in March. Gonzalez also voted for Trump’s impeachment and the former president is supporting an opponent to him, his former aide Max Miller, in the Republican primary.

Herrera Beutler was almost called in as a witness in Trump’s second impeachment trial after she revealed details about McCarthy and Trump’s phone call on January 6th. She is the one who revealed that the two men spoke that day.

The situation puts McCarthy in a tough spot. With his desire to be speaker should Republicans win back control of the House, he needs all of his incumbents to win re-election.

But Trump has been vocal and public about his desire for vengeance against those who voted for his impeachment, interfering in primaries and backing opponents to those he sees disloyal.

Some of those Republicans Trump is targeting – like Herrera Beutler and Upton – are in key swing districts where there are fears that, if the more conservative candidate Trump favors wins the primary, the GOP could lose the general election. Trump was originally angry at McCarthy for to taking to the House floor on January 6th, hours after the Capitol building was cleared of MAGA supporters, to say Trump ‘bears responsibility’ for what happened.

Some of those primary opponents had tough words for McCarthy.

“McCarthy is talking out of one side of his mouth, saying that he supports the MAGA movement, Trump and President Trump’s policies, but his money is supporting Jaime Herrera Beutler and four of the other impeachment voters,” said Joe Kent, a Trump-backed primary challenger to Herrera Beutler.

Kent added: “It’s just part of the GOP grift. So me and the rest of the base, we’ve kind of heard enough from them.”

Democrats are preparing to lose control of the U.S. House in the 2022 midterm elections.

Last month, a top House Democrat warned that the Republican Party is in a prime position to take back House in next year’s midterm elections.

Democratic Congressional Campaign Committee Chairman Sean Patrick, who serves as a congressman from New York, says Democrats would lose their House majority if the midterms were held today.

Democrats are facing serious headwinds going into next year.

Three-quarters of senior Capitol Hill aides think Republicans are going to win back control of the House of Representatives in the 2021 midterm elections.

Republicans need a net gain of 5 seats to regain the House majority in the midterms next November.

And the once-in-a-decade redistricting process – pegged to the 2020 census – is expected to generally favor Republicans over Democrats.