Maricopa County Is At It Again! Arizona Residents Are Receiving The WRONG Mail-In Ballot For Local 2021 Election 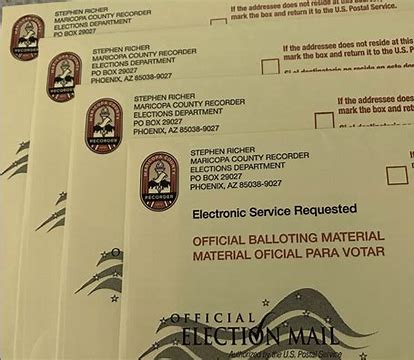 By Jordan Conradson
Published October 13, 2021 at 8:05am
93 CommentsShareTweetShare to GabTelegramShare “Something ain’t right” with the Maricopa County November 2, 2021 local elections.

On Sunday, The Gateway Pundit reported that Arizona State Representative Travis Grantham received a mail-in ballot for his sister that lives in California, following repeated attempts to cancel the voter registration and notify Maricopa County of the change.

Just got 4 mail-in ballots for myself & each of my kids. One’s lived in CA for 10+ years and the other 2 are registered at their own addresses AND received a ballot there. I’d tell Stephen Richer he’s doing a f’d up job with MC voter registration, but he’s blocked me

Fann: Didn’t Maricopa County say it was everyone else’s fault for not notifying them?

This is the same “criminal incompetence” that Stephen Richer ran on fixing when he even went so far as to say former Maricopa County Recorder Adrian Fontes belongs in prison.

Richer said he would replace the staff responsible for these same issues seen in 2020, 2018, and beyond with loose mail-in ballots getting sent all over the valley, inaccurate registration data, and ill-kept voter rolls.

The Maricopa County Director of Election Services and Early Voting, Rey Valenzuela, who was promoted under the “criminal” Adrian Fontes is still in his position along with many others from the Fontes Administration.

Once Stephen Richer was given the proper initiation, he immediately stopped pushing these “election fraud conspiracies”.

Liz Harris’s canvassing efforts discovered that this was happening on a large scale in 2020, and thousands of ballots were delivered to the wrong address.

They’re doing it again and the Arizona Attorney General needs to step in now before it is too late.