Look How Stupid the Government (and the FBI) Think we Are! 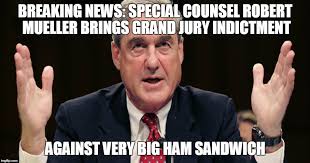 Even after the entire Russia has been debunked story as a hoax, they are still playing with us and putting wanted posters for those complicit in something that never happened.

The FBI is offering a $250,000 reward for information leading to the arrest of a Russian-Ukrainian political consultant who was charged during the special counsel’s investigation alongside former Trump campaign chairman Paul Manafort.

Konstantin Kilimnik was indicted on June 8, 2018, on obstruction charges as part of the special counsel’s probe, led by former FBI Director Robert Mueller.

Prosecutors alleged that Kilimnik and Manafort pressured two former business associates to provide false testimony in a case that was already pending against Manafort.

Kilimnik worked closely for years with Manafort in Ukraine, where they consulted for former Ukrainian president Viktor Yanukovych. They continued working together after Yanukovych was deposed in 2014, meeting multiple times during the presidential campaign in 2016.

Kilimnik’s ties to Russia have been a source of mystery for years.

The FBI’s bulletin says that Kilimnik “is assessed by the FBI to have ties to Russian Intelligence.”

The report said that Kilimnik served as an intermediary between Manafort and Oleg Deripaska, a Russian oligarch close to Russian president Vladimir Putin.

In July 2016, while on the Trump campaign, Manafort emailed Kilimnik to say he could provide “private briefings” to Deripaska. Manafort owed millions of dollars to Deripaska at the time over a failed business venture in Ukraine.

Manafort was convicted on money laundering, tax and bank fraud charges related to income he received from his business dealings in Ukraine. Manafort was also indicted on charges that he acted as an unregistered foreign agent of Ukraine. He was not charged with anything related to Russia, or with conspiring with the Russian government to help the Trump campaign.

Trump fired Manafort in mid-August 2016 following reports about alleged payments he received under the table for his Ukraine work. Trump pardoned Manafort in December.

2 thoughts on “Look How Stupid the Government (and the FBI) Think we Are!”