Can You Return To Normal Life After The COVID-19 Vaccine? 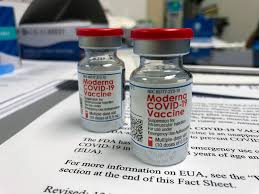 The vaccination provides a level of security to participate in everyday activities like going to the grocery store, though others such as indoor dining and going to the movies should continue to be avoided, NBC New York reported.

It is largely unknown whether people who have received both doses of the vaccine are still capable of spreading the virus or carrying it to others who are more at risk such as those who have not been vaccinated or who have only received the first dose, NBC New York reported.

Most people should be “more confident about going shopping, for example, or going to see your grandkids, or giving your daughter a hug,” Pennsylvania immunologist E. John Wherry said, NBC New York reported. The vaccine has been effective at preventing severe cases and symptoms of COVID-19, though experts are unsure how well it stops transmission.

People who have been vaccinated don’t have to participate in regular quarantine if they are exposed to someone who tests positive unless they are exhibiting symptoms as long as the exposure happens at least two weeks after and within three months of their second dose, NBC New York reported.

However, U.S. infectious disease expert Dr. Anthony Fauci said people who have received both doses of the vaccination should not participate in indoor dining or other activities like going to movie theaters, Business Insider reported.

“There are things, even if you’re vaccinated, that you’re not going to be able to do in society,” Fauci said, Business Insider reported “For example, indoor dining, theaters, places where people congregate. That’s because of the safety of society.”

Meghan McCain criticized Fauci for saying that vaccinated American’s should not gather with family members in group settings and that masks could be around until 2022, the Daily Caller reported. McCain said Fauci’s messaging was inconsistent with what other countries are reporting.

“If getting the vaccine means that just nothing changes and we have to wait another few years until everyone gets it, there’s already a lot of people not getting it. We’re already having a messaging problem getting people to take this vaccine. So I’m over Dr. Fauci,” McCain said, the Daily Caller reported.

Millions of Americans who are most at risk to be negatively impacted by COVID-19 have been vaccinated, Business Insider reported.

The biggest question experts have is whether a fully vaccinated person can pass COVID-19 to other people, NBC New York reported. Studies have shown that people who received the first vaccine and tested positive for COVID-19 had lower viral loads than those who weren’t vaccinated and were less infectious.

It is also unclear whether the vaccine will be effective against COVID-19 mutations, NBC New York reported. It’s likely that countries will create their own travel requirements for those who have been vaccinated.