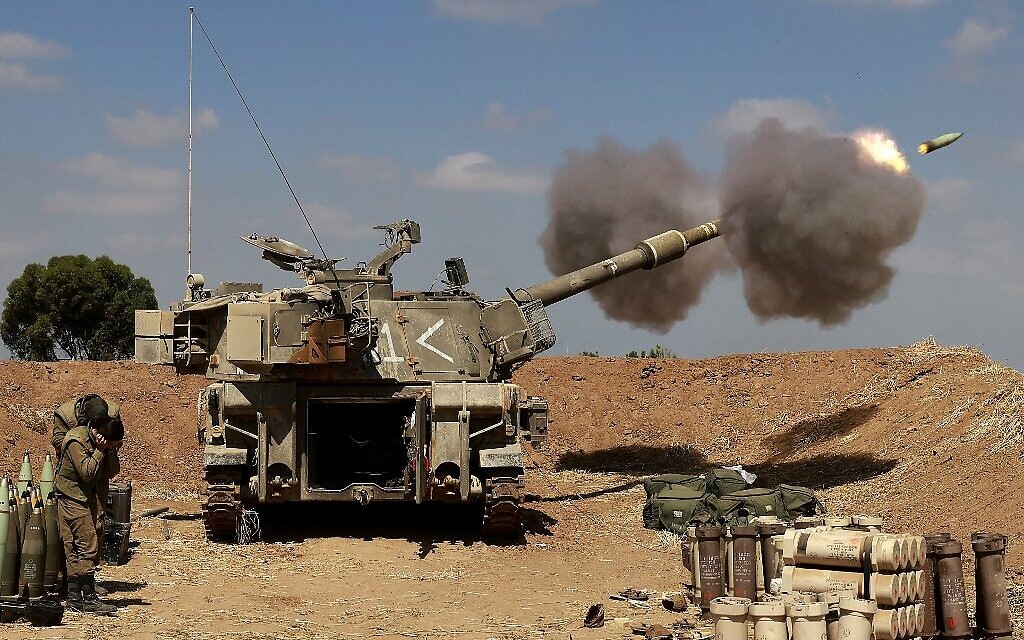 A senior diplomatic source quoted by Channel 12 news says Israel is considering a ground operation in Gaza in response to the continued heavy rocket fire from the Strip.

The unnamed source says the option has been discussed by the security cabinet at the military’s request and that all options are being weighed.

More, heavy rocket fire is launched toward Beersheba and other southern communities.

Most of them land in open areas or are intercepted by the Iron Dome air-defense system, but one directly hits a car that was empty.

Another lands in a backyard of a home in the Eshkol region, causing no casualties.

Israel is amassing forces along the Gaza border to prepare for a potential ground operation, IDF Spokesperson Hidai Zilberman says.

“We are gathering forces on the Gaza border, preparing them. They are studying the field and we will use them when we decide to,” Zilberman tells Channel 12 news.

“The initiative is ours and time is on our side,” he declares.

Gaza will run out of fuel by Sunday — Israeli defense official

The Gaza Strip will run out of fuel for its electricity generators by Sunday, an Israeli defense official tells reporters.

According to the official, who is speaking on condition of anonymity, Gaza is down to having just five hours of electricity per day, after having 16 hours per day on average before the fighting.

Some of this is due to Israel shutting down the Kerem Shalom Crossing, which is normally used to send fuel into Gaza, and some of this is because rockets fired by terrorists in the enclave struck some of the power lines into the Strip near the city of Rafah.

According to the official, three of the four turbines that normally run in Hamas’s power plant are currently out of service as a result of the fuel shortage.
Gaza’s water supply has also been affected by the power cuts, limiting the amount of running water in the Strip to once every two days, the official says.

According to the Israeli defense official, residents of the Gaza Strip appear to be extremely concerned about the fighting and are largely hiding in their homes. He says there is also anger among the population because the fighting has prevented them from celebrating the Muslim Eid al-Fitr holiday.

The IDF says it has bombed the “operational apartment” of Samer Abu Daka, the head of Hamas’s drone operations, after the terror group launched many “suicide drones” toward Israel earlier today.

There are no reports of recent casualties.

The IDF Home Front Command extends its emergency restrictions for areas under threat of Gaza rockets until Saturday evening.

The decision has been made following a situational assessment after the fighting has shown no sign of abating.

They also forbid educational activities and say workplaces can only operate in places where a bomb shelter can be reached in time.

More, nonstop rocket sirens are heard in Israeli communities near Gaza and several interceptions are observed following a major barrage by Hamas terrorists.

Alarms are also heard in the area of Beersheba and Rahat in the Negev.

One landed inside a community, causing no damage, and another landed in an agricultural field and caused a blaze that is being dealt with by fire and rescue authorities.

The Israel Defense Forces says it just conducted an airstrike on a Hamas intelligence facility with dozens of terrorist operatives inside.

The military says the site served as the main command center for its surveillance network.

It is not immediately clear how many Hamas members are killed in the strike.Volume 90%

The IDF says it has launched strikes on four apartments of senior Hamas commanders in the Gaza Strip.

In a statement, the military says Air Force planes bombed “operational apartments” of the deputy commander of Hamas’s Jabalia regiment in the northern Strip, as well as three company commanders in northern and central Gaza.

All the apartments were allegedly used to direct recent rocket attacks at Israeli cities.