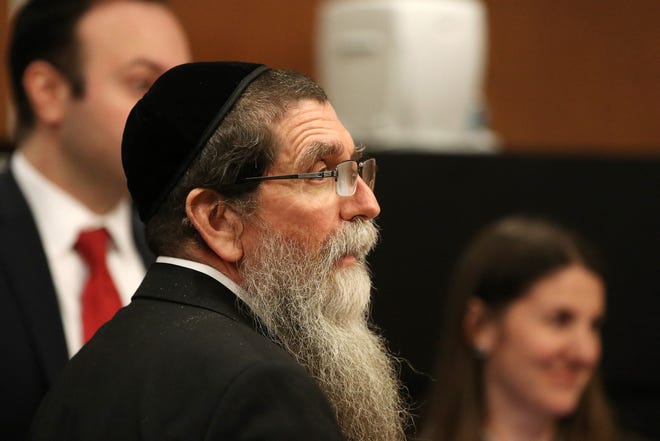 The founder of Lakewood’s School For Children With Hidden Intelligence, awaiting resentencing following his conviction on money laundering and misconduct charges, now claims a bookkeeper has come forward to take responsibility for an accounting error he says formed the basis of the criminal case against him.

Rabbi Osher Eisemann, the longtime leader and founder of the prominent, private special education school commonly referred to as SCHI, is asking the court for a new trial, claiming the newly discovered evidence clears him of wrongdoing.

His lawyers have filed a motion for a new trial based on a certification recently submitted by Rochel Janowski, a former part-time bookkeeper for the school, who asserts she mistakenly entered a $200,000 credit on a loan account to balance the school’s books, not to write down a loan to Eisemann as the state alleged at trial in 2019.

The state alleged that $200,000 was removed from the school’s account to write down a $200,000 debt Eisemann owed to Services for Hidden Intelligence LLC, the non-profit fundraising arm of the school.

A Middlesex County jury rejected allegations that Eisemann, 64, of Lakewood, diverted $979,000 from the school to his own purposes, but it found that he moved $200,000 of school money through private accounts, including his own, before funneling it back to the school through a third-party organization to make it appear he was repaying a debt.

Now Janowski, in her certification, says she was responsible for the $200,000 credit to the loan account. She said in her certification that she never discussed the bookkeeping entry with Eisemann and does not believe he had any knowledge of it prior to the criminal case against him.

The state Attorney General’s Office, in a response to the motion, says Janowski’s claim “lacks credibility’’ and could have been presented by the defense at trial, but it is now barred from consideration.

Had Janowski been called as a defense witness during the trial, the state would have countered with more incriminating evidence, including testimony that a $100,000 certified check from the school was used to purchase real estate in Lakewood in Eisemann’s name, Nicodemo wrote.

No matter whether it was a strategic decision by the defense not to call Janowski, courts do not allow defendants a second chance to employ a new tactic post-trial, Nicodemo wrote.

Eisemann started the school in 1995 to serve a handful of developmentally delayed, medically fragile and emotionally challenged children, in part because he has a child with special needs. As the school grew, it moved into a 64,000-square-foot building on a 13-acre plot on Oak Street in 2007. It now serves more than 600 special needs youngsters, according to its website.

The school receives about $1.8 million a month from public school districts that send students there, the attorney general’s office said when the charges were first brought against Eisemann in 2017. Eisemann has been on a leave of absence from the school since then.

He stood trial before Superior Court Judge Benjamin Bucca in Middlesex County and was convicted of money laundering and misconduct by a corporate official, both second-degree crimes carrying prison terms of five to 10 years.

The jury acquitted Eisemann of a more serious offense, first-degree corruption of public resources, for which he would have faced 10 to 20 years in prison, as well as second-degree theft and second-degree misapplication of entrusted property.

Bucca sentenced Eisemann to two years on probation, 60 days in jail and a $250,000 fine, but a panel of appellate judges in a scathing opinion in January ordered the defendant to be re-sentenced by a different judge, saying Bucca ignored the jury’s verdict and the law by not sending Eisemann to state prison.

Eisemann was scheduled to be re-sentenced in July by Superior Court Judge Joseph Paone in Middlesex County, but his re-sentencing is on hold, pending the outcome of his motion for a new trial.

Bucca was scheduled to hold a hearing on the motion for a new trial on Aug. 31, but he adjourned it until Nov. 16.

Eismann’s original sentence was held in abeyance while he appealed his conviction. The appellate judges who ordered his re-sentencing rejected his appeal, and the state Supreme Court has declined to hear the case.

Janowski said in her certification that she was one of three bookkeepers working for the school, and that she worked there between 2014 and 2017, including 2015, when the state alleged the questionable transactions occurred.

“I do not have a background in accounting,’’ her certification said.

“I never recall Rabbi Eisemann telling me to do anything having to do with bookkeeping,’’ Janowski’s certification said.

At trial, Jonathan Rubin, director of GZYD, testified Eisemann asked him to take out a loan in his name because Eisemann could not use his own name for the loan for fear the money would get lost in litigation, Nicodemo wrote in the court filing. Rubin testified that Eisemann asked him to accept a $200,000 cashier’s check from him and deposit it into GZYD’s account and write a $200,000 check payable to Taz Apparel, Nicodemo wrote.

Aaron Gottlieb, who was associated with Taz Apparel, testified that Eisemann asked him to deposit the check in his company’s account and then write a check to Eisemann in the same amount, Nicodemo wrote.

“Corroborative testimony showed that the defendant touched every transaction involving the $200,000,’’ the deputy attorney general wrote.

Soon after the trial, Eisemann “attempted to shift the responsibility’’ to an “unknown bookkeeper’’ who made ledger entries appearing to write off $200,000 he owed the foundation, Nicodemo wrote.

Janowski, in her certification, said her “sole purpose’’ in crediting Eisemann’s loan account was to balance the foundation’s books.

“The $200,000 credit (to the loan account) was not intended to erase a debt owed by Rabbi Eisemann, nor did it,’’ she wrote in the certification.

Janowski mistakenly credited the Eisemann loan account instead of GYZD’s loan account “to properly balance the books,’’ she certified. “This was a simple mistake on my part.’’

She also certified that the Eisemann loan account “was not used to account for monies actually owed by Rabbi Eisemann to the foundation or vice-versa,’’ but instead was “a dumping account in order to keep the books balanced when we did not know how to attribute a particular transaction.’’

Eisemann’s attorneys said in their motion that Janowski’s revelations clear him of wrongdoing.

“There was no crime, only a mistake by a bookkeeper too scared to come forward, given the state’s aggressive prosecution of Eisemann and the foundation,’’ they wrote.

“What Janowski claims to know now, she knew at the time of trial,’’ he wrote.

By the time of the trial, Janowski was no longer employed by the school, she certified. She was never interviewed by investigators, nor did she come forward to the Eisemann’s defense team, “because I was unaware of the specific allegations made against Rabbi Eisemann or that they involved my entry into QuickBooks,’’ she said in her certification.

“Beyond that, as a mother of young children, I had no interest in wading into a criminal prosecution involving very serious allegations of theft against Rabbi Eisemann and the foundation,’’ she said.