It’s Happening all Over the Country: School Board Boots Critical Race Theory Protesters from Meeting 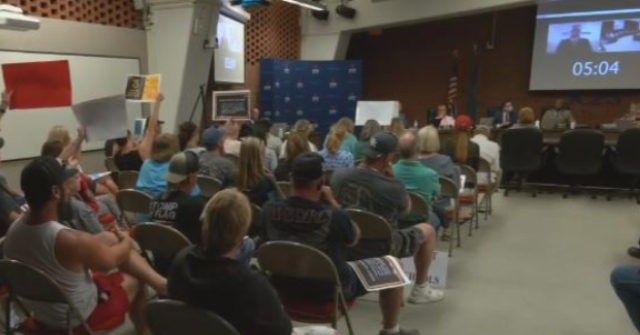 A few dozen protestors in Kentucky showed up for the Jefferson County Board of Education meeting Tuesday to oppose critical race theory, which claims racism is the foundation of the United States.

The Louisville television station WDRB reported on the meeting, showing the protesters confronting the school board and security personnel.

“You can always get a lawyer and sue us but you’re going to leave right now,” a member of the board tells the protestors.

The unnamed board member told the local outlet that lessons on race should be part of education children while not directly citing critical race theory directly.

WDRB reported on the contentious meeting:

Critical race theory has drawn the ire of many, including Senate Minority Leader Mitch McConnell, as states look to ban teaching its concepts in schools. Similar bills have been pre-filed in Kentucky for consideration in next year’s legislative session.

Tuesday marked the first time that a school board meeting in Kentucky’s largest school district has been disrupted because of opposition to critical race theory.

About half of the board left the meeting room as members of the audience began to shout and security officers confronted them. Some protesters were asked to leave while others left voluntarily.

“I think you all should know that critical race theory is not in the curriculum,” board member Corrie Shull said.

“Sure it is,” one person responded.

According to the Courier Journal, mentions of critical race theory were removed from outlines of an “elective course” called “Developing Black Historical Consciousness” in May.

Similar scenes are unfolding across the country as residents respond to a wave of left-wing policies from the White House to local school boards.

20 thoughts on “It’s Happening all Over the Country: School Board Boots Critical Race Theory Protesters from Meeting”