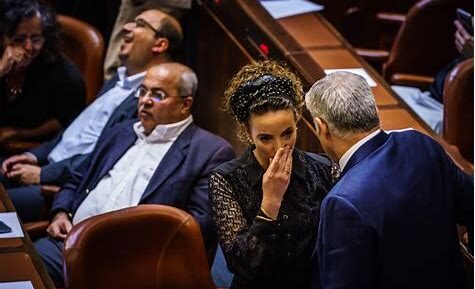 (JTA) — Of all the issues facing Israel — violence within the country, how to handle Russia’s war on Ukraine, Iran — the one that appears to have put the country’s delicate governing coalition at risk could appear picayune.

When Idit Silman, a member of Knesset from the right-wing Yamina party, surprised government leaders and even her party by resigning Wednesday, she said she was doing so over hospital food.

Her decision vaults issues of religious freedom and Israel’s Jewish character to the center of public discourse. Silman, a former teacher and health care executive, has also opposed efforts to allow egalitarian prayer at the Western Wall, and her husband said she opposed a plan to let more rabbis sign off on conversions.

“I will not abet the harming of the Jewish identity of the State of Israel and the people of Israel. I will continue to try to persuade my friends to return home and form a right-wing government,” Silman said in a statement about her resignation, according to the Times of Israel. “I know I am not the only one who feels this way. Another government can be formed in this Knesset.”

The ostensibly precipitating issue is a ruling by Israel’s highest court that hospitals must allow people to bring in food that is not kosher for Passover, known as hametz, although the hospitals discourage doing so and serve only kosher-for-Passover food on their own.

But that ruling has been in place since 2020, suggesting to many that Silman’s explanation for her resignation may have been a pretense amid pressure from her base to stop working with more liberal factions as well as Arab lawmakers within the governing coalition.

The coalition formed a year ago after four elections in two years shook confidence in Israel’s parliamentary system and impeded the government’s response to the COVID-19 pandemic and other crises. Politicians with little in common ideologically agreed to work together to bring stability to the government and, for some, to ensure that longtime Prime Minister Benjamin Netanyahu was ousted.

Now, Silman’s resignation leaves the Knesset evenly split, with 60 members on each side, between supporters of Prime Minister Naftali Bennett and the opposition, fueled by supporters of Netanyahu, who has remained on the sidelines and has signaled that he is looking for a way back into power.

Silman’s resignation brings her back into alignment with Netanyahu and his Likud party. If she or others are able to convince another member to resign from the coalition, a new election could be required — or, if many resign, the opposition could potentially seize control without an election.

If Bennett and his allies can persuade other lawmakers to remain in the coalition, the government can stay in place, but even more tenuously. The split means that Bennett’s allies could no longer pass legislation on their own.

Silman’s resignation also means that Israel is being plunged into a governing crisis at a crucial moment for managing tensions during Ramadan, when flareups between Palestinians and Jews have historically taken place.

Israeli news organizations have reported that Bezalel Smotrich, a right-wing former member of Knesset who wants Israel to be governed solely by Jewish law and who opposes rights for Arabs, non-Orthodox Jews and LGBTQ people, appears to have played a role in convincing Silman to resign and even crafting her resignation letter.