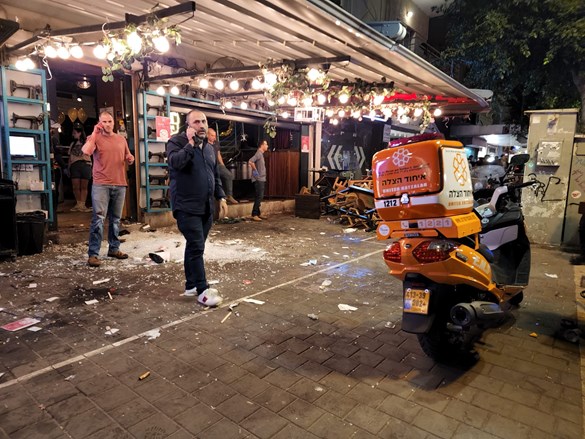 The terrorist managed to fire 12 bullets and fled the scene. The Israel Police released a description of the terrorist: He was wearing a black T-shirt, black pants and a blue backpack and was armed with a gun.

It is believed that the terrorist is a Palestinian Arab from the northern Samaria region.

The police called on the public to continue with their daily routine, and at the same time to avoid gatherings, to be very vigilant and to report any suspicious people to the Israel Police.

The terrorist who carried out the attack in Tel Aviv was located and thwarted early Friday morning. The terrorist was located by the Israel Security Agency (Shin Bet) while hiding near a mosque in Jaffa and was killed during an exchange of gunfire with ISA and Yamam counterterrorism fighters. There were no injuries to the Israeli forces.

The Magen David Adom (MDA) Spokesperson updated that MDA EMTs and paramedics treated and evacuated nine patients who were wounded in the attack in Tel Aviv to Ichilov, Sheba Tel Hashomer and Wolfson Hospitals.

Two males approximately 30 years old were evacuated to Ichilov while undergoing resuscitation. Following further medical efforts they were pronounced dead at the hospital.

Three seriously injured – a 38-year-old male, a 28 year-old-female, and a 20-year-old male were evacuated to Ichilov Hospital with gunshot wounds.

“At 9:00 p.m., MDA’s 101 call center in the Dan Region received reports of multiple victims wounded in shootings at multiple locations, including on Dizengoff Street, Gordon Street, and nearby, in Tel Aviv,” an MDA spokesperson said.

“MDA paramedics are providing treatment to a number of wounded victims with varying degrees of injuries at the scene.”

United Hatzalah volunteer EMT Akiva Kauffman, who was one of the first responders at the scene at Dizengoff Street reported, “There were a number of very serious scenes in which attacks took place. I treated and transported one person who was in serious condition in one of United Hatzalah’s ambulances to the hospital. Additional injured people were transported in other ambulances both from United Hatzalah and other ambulance companies. Additionally, the Psychotrauma and Crisis Response Unit responded to the incident and treated numerous people who suffered emotional shock and trauma due to having witnessed the shootings.”

Police spokesperson Eli Levy told Channel 12 that the incident appears to be a terrorist attack, and that multiple gunmen were responsible.

Emergency teams reported that gunfire was exchanged between the terrorists and security forces.

Witnesses say one terrorist has been neutralized, though at least one other gunman managed to flee the scene and is currently at large. Security forces deployed to the area are searching for additional terrorists.

Police said that one of the sites targeted in the shootings was a pub, and warned locals to remain indoors until the manhunt is completed.

“A terrorist shot at a pub on Dizengoff Street in Tel Aviv. Five people were wounded to varying degrees and were evacuated from the scene. A large number of police forces have been deployed to the area to search for the terrorist. We ask the public to remain indoors and to stay away from the area and allow the security forces to do their work.”

Officials at Ichilov Medical Center said that two of the ten victims wounded in the shootings had been declared dead after arriving at the hospital.

Of the eight other victims, four are in serious or critical condition, two are in moderate-to-serious condition, and two are in light condition.

MDA Paramedic Yisrael Weingarten arrived on scene on an MDA Medi-cycle: “As soon as reports were received at MDA’s 101 Emergency Dispatch Center of a shooting attack in Tel Aviv, large numbers of MDA teams were sent to the scene. There was a large commotion at the scene, with dozens of people running in the streets. We saw six patients lying on the sidewalk. We immediately began treatment, including bleeding control and bandaging. We placed the patients in the MICUs and conveyed them to hospital. Two of them were unconscious and underwent resuscitation, and four others were conscious.”

Police surrounded a building on suspicion the terrorist at large had hidden inside. A suspect arrested at the building was later found to be an illegal resident with no ties to the attack.

Public transportation in the vicinity of the attack was closed Thursday night as a result of the searches.