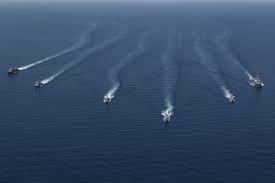 The drills were part of the annual trilateral Noble Dina exercise and included naval vessels and helicopters.

In an effort to strengthen its control over the eastern Mediterranean Sea, the Israel Navy held joint maneuvers this week with Greece, Cyprus and France, practicing anti-submarine warfare and search-and-rescue operations.

The Greek Navy stated that the main objectives of the exercise was focused on addressing modern challenges and threats in the marine environment and promoting the level of cooperation and mutual understanding of the three navies.The drill took place in the Eastern Mediterranean and the Cretan Sea in the southern part of the Aegean Sea.

According to the IDF, while most of the exercise dealt with underwater warfare, other scenarios were also practiced, such as rescue situations while at sea and air defense.While Israel’s Navy is relatively small compared to other IDF corps, it has a significant amount of territory to protect since the expansion of the country’s exclusive economic zone (EEZ) from 40 miles to 150 miles four years ago.A submarine in the annual Noble Dina naval exercise for 2021, coordinated between Israel, Greece, Cyprus and France, March 12, 2021. (Credit: IDF SPOKESPERSON’S UNIT)Israel regularly participates in military exercises with the United States and Greece.

It was the first time that France participated in the naval drill, which comes amid increased tension in the Mediterranean over concern of possible economic terrorism following the oil spill in late February which Israeli officials have linked to Iran.“