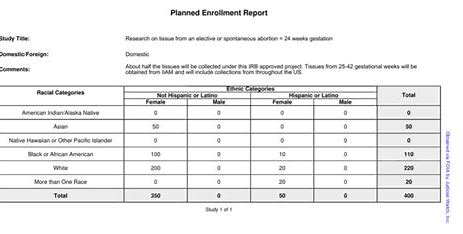 The facts we have at hand should be enough to get the attention of the federal authorities and elected officials responsible for ending this nightmare.

This article contains disturbing information about medical experimentation on humans.

Another week, another discovery that the U.S. government attempted to cover up scientific experiments on viable babies—with by far the most condemning evidence yet and increasing calls for federal investigation. On Monday, Judicial Watch and David Daleiden’s Center for Medical Progress (CMP) released the details of a $3 million grant the National Institutes of Health (NIH) gave the University of Pittsburgh to create a fetal “Tissue Hub” to dismember and distribute the organs of full-term aborted babies, selected by race, for inhumane experiments.

As if that wasn’t appalling enough, new evidence points to the University of Pittsburgh harvesting organs from born-alive babies as a real possibility—meaning the babies would have died while researchers dissected their bodies for kidneys and other organs.

The U.S. Department of Health and Human Services (HHS) recently handed over the documents thanks to a lawsuit Judicial Watch filed last year on behalf of CMP when the agency failed to deliver records CMP requested through the Freedom of Information Act (FOIA).

Last month, Daleiden’s group exposed the University of Pittsburgh’s work to graft the full-thickness scalps of unborn babies onto the backs of rodents in a study funded by Anthony Fauci’s NIAID office. The records released this week reveal this wasn’t a one-off incident, unearthing an agreement between NIH and the university to fully operationalize a grotesque baby organ bank funded by federal taxpayers.

As just discovered this week, the specific terms of the grant were to “develop a pipeline to the acquisition, quality control and distribution” of human babies from all levels of development right up to the age of birth. The University of Pittsburgh’s grant application to the NIH requests funding to “generate an ongoing resource” to fetal tissue from babies 6 to 42 weeks old by establishing itself as the “Tissue Hub and Collection Site” for the “GUDMAP” project. The project supplies researchers across the country with aborted kidneys, bladders, and other organs for experimentation.

The series of grants, running from 2015 into May 2021, propose that fetal collections “can be significantly ramped up” from previous years—effectively making the university a base for harvesting and distributing baby tissue.

Pittsburgh claims it has been collecting fetal tissue in enormous volumes for more than a decade, including “liver, heart, gonads, legs, brain” and “kidneys, ureters and bladders.” In 2015 alone, it distributed “over 300 fresh samples collected from 77 cases” and “as many as 725 cases” the year prior. It’s reasonable to assume that this number exponentially increased, since their stated target goal is to have a minimum of five cases of tissue per week for ages 6 to 42 weeks. That’s at least one baby per day.

On Wednesday, the University of Pittsburgh’s spokesman dodged multiple accusations that the organs of born-alive babies were being harvested, possibly indicating that federally funded researchers at the university harvested babies’ kidneys from their bodies while their hearts were still beating.

The spokesman told Fox News the researchers aimed to minimize what scientists call the “warm ischemia time,” or in the words of the NIH, “the time [an] organ…remains at body temperature after its blood supply has been reduced or cut off.” The Pitt spokesman confirmed Wednesday this was in fact the time after tissue was collected and distributed: “Ischemia time, he said ‘refers to the time after the tissue collection procedure and before cooling for storage and transport.’”

The Center for Medical Progress explained this could mean “the organs are still receiving blood supply from the fetal heartbeat” during tissue collection. This means the spokesman’s quotes affirm the possibility these babies are being delivered alive and killed by the process of organ harvesting.

The university divulged in the grant application that their method of organ-harvesting, evidenced by “record[ing] the warm ischemic time,” ensures high-quality specimens, but did not go into further detail and in fact redacted several portions of the document.

The NIH project admitted it used inducing labor as a procedure, almost surely meaning babies who could survive outside the womb were harvested by a barbaric—and illegal—late-term abortion method. Pittsburgh outlines what abortion procedures are used to obtain specimens, including dilation and curettage, dilation and evacuation, and labor induction. It is unclear whether or not lethal injections were used.

Physicians attending to mothers who donate the tissue of their aborted child retain “the responsibility for determining the procedure to be used for termination of the pregnancy.” Given that Pitt’s emphasis is on “high quality tissue samples,” the likelihood labor induction and partial-birth abortion win out as the procedures of choice is high, as organs are usually mutilated through D&C or D&E abortions but more likely to be preserved intact if the baby is delivered whole.

Pittsburgh also specified they select aborted babies by race in order to fill “diversity” quotas to ensure researchers had plentiful African American and Hispanic specimens to experiment on. Pittsburgh informed the NIH their proposal sets a “racial target” for harvesting organs from African American, Hispanic, and Asian babies, setting a goal that 50 percent of their tissue supply come from minority fetuses; 25 percent of which would be harvested from African-American women.

The proposal reasons that harvesting tissue from “an appropriate racial mix” of babies is necessary because Pittsburgh is “a racially mixed metropolis,” but the numbers say otherwise. Allegheny County, Pittsburgh’s chief metropolitan zone, reflects this disparity with a population close to 80 percent white and a nationally representative 13 percent black.

The university defended itself on Wednesday by insisting it wanted to reflect the “inclusion of women and minorities.”

The known facts in this case should be enough to get the attention of the federal authorities and elected officials responsible for ending this nightmare. In a press statement this week, Daleiden called for the Senate Judiciary Committee to bring any involved, including NIH Director Francis Collins, Fauci, and representatives of the University of Pittsburgh and Planned Parenthood, “to face…imperative scrutiny for the enabling of partial-birth abortions and infanticide in the government-sponsored human trafficking of aborted infants.”

On Friday, Pennsylvania state Rep. Kathy Rapp heightened calls to investigate the University of Pittsburgh with a request that the state’s auditor general conduct a “thorough investigation of all state and federal funds.” U.S. Republican Senate candidate Sean Parnell joined in, noting that “If these allegations are true that scientists at the University of Pittsburgh were harvesting kidneys of unborn babies while their hearts were still beating, they should not only have their taxpayer funding immediately suspended, everyone involved should face criminal charges.”

Our government has not been simply complicit in this atrocity, it has helped instigate it. The University of Pittsburgh and NIH owe American taxpayers complete transparency, including the unredacted release of all related documents to account for these revelations. It’s beyond time these atrocities are publicly answered for, and to the fullest extent possible.