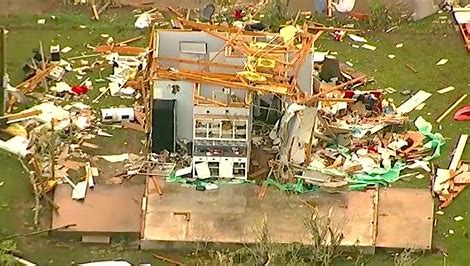 Last night, A horrific tornado that hit Edwardsville, Illinois. It also hit an Amazon warehouse, collapsed the roof and left people trapped. It was termed a “mass casualty incident.” Two people were reported killed in early reports. Search and rescue activities are still underway, trying to help people there.

Here’s Annie Frey’s take, about two miles away from the warehouse, where it also hit and damaged buildings over a century old on her parents’ farm.

But it was only part of the story with tornadoes hitting multiple states, including Illinois, Missouri, Arkansas, Tennessee, and Kentucky. Kentucky Gov. Andy Beshear said there were at least 70 people dead in that state and the toll might reach 100. He declared a state of emergency, after a single tornado ripped across the state for more than 200 miles. At least four different tornadoes struck the state during the night.

In Mayfield, Kentucky, it looked like a bomb hit. A candle factory that had 110 people in it was flattened; forty people have been rescued so far.

A “mass casualty event” was also declared at the destruction of the Monette Manor Nursing Home in Monette, Arkansas where at least two people were killed and five people were hurt.

Twenty people were initially trapped. But they have reportedly gotten everyone out from the nursing home, so that’s good news. One person was also killed in Leachville, Arkansas, at a Dollar General store. More than 200,000 are reported without power this morning as a result of the tornadoes.